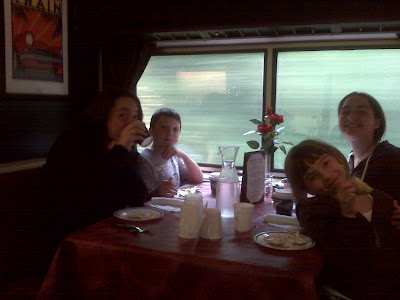 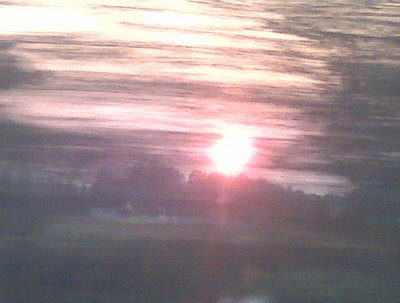 Last night we arrived at the Springfield, VA Courtyard a little after 9 PM. The pool was closing so we changed quickly and enjoyed the hot tub and pool. A father and his two daughters joined in and soon the kids were eying each other suspiciously and doing their own thing. The father took over the hot tub, and we dried off and headed off to the courtyard. It was warm last night. I bought a beer, and we headed back to the room. Lights were off a quarter to 11. By 6 AM I was awake and ready to go. I finished up some work, and wrote my weekly while the rest of the bums got dressed, took showers and watched the Disney Channel.
We ate breakfast, really brunch at Bob Evans, I had eggs and pancakes and sausage and OJ and coffee. The food wasn’t too bad, but the waitress had an extremely dry sense of humor. Not sure how he day was going, but she told us she was there since 5:15.
Afterwards, knowing we had time to kill, we drove to DC and went to FDR’s memorial. It’s a beautiful display, using boulders and water, and is the only presidential memorial which includes the first lady. Took some pictures with Amanda standing next to the statue.
We’ve been at the Larton terminal since 1 PM. This is our first time and we didn’t know what to expect. Not sure if our seats would be next to one another. The process was very easy. We drove the car, checked in and watched as our car was inspected and videotaped, since they wanted to make sure there were no erroneous claims of damage. I took Bell and Joe outside for a walk. We had an hour and half to kill. The depot building is very roomy and bright. The building is air conditioned and modern. A TV is playing in the corner, and there is a small café, a shop really in one corner. From the look of it, the place appears to be in Florida.
It appears as if people are boarding though there was no announcement made. Just waiting for Ali to get back since she bought TUMS. This place is emptying fast. Time to go?
We’re on the train. There is a lot of room. It’s very comfortable. Whoever is sitting behind me is playing with the foot rests. The seat is knocking. There is a family next and behind us. This is not going to be a quiet train, but let’s see how it works out. I can use an ADVIL.
Instead of Advil I had a couple of beers. Dinner was served at 5 PM and 7 PM – we chose the early dinner since there was a movie playing for the kids at 7…I had cod and veggies and rice. The food was very good. With dinner came white wine and water and choices like iced tea and apple juice for the kids. They were given the choice of chicken fingers, and mac and cheese. There was a lot of food. The other options were a beef or veggie lasagna. The settings were pleasant, a flower on each table as well as silverware, but the cups were plastic, as well as the plates. For dessert we had cheese cake with a couple of options, either covered in strawberry or chocolate.
Overall it was quiet, but one neighbor watched a movie on his laptop and the language was not appropriate for children. A couple had two little ones on-board and it took them a long time to fall asleep. Music came over the loud speaker but was shut off close of 8 PM and soon after lights were shut down and we got comfortable.
Sleeping was a little bit of a challenge. Trying to get my 6 foot 4 body comfortable – even in reclining chairs was interesting. I bent my legs and curled in the seat, and propped the small pillow on a corner as well as my sweat pants.
I’m typing this, knowing we’re expected to arrive an hour earlier. Amanda and I had breakfast and met an older couple from Florida. Cereal as well as warm bagels and muffins were served, coffee and OJ as well. A good start to the vacation…rise and shine we are in Florida.
at July 23, 2009 No comments:

Went running earlier. Twenty nine minutes and we’re pulling out of Stony Brook.
This past weekend we left Amanda in Hyde Park. She was accepted into a wonderful program – Young Women’s Leadership Group, which is organized by the Eleanor Roosevelt Foundation. Today she’s taking a hike, and this week this she will meet with global leaders at the UN and work in various shelters, clinics and bring back a new maturity as well as a transformed outlook on life. It’s an incredible opportunity. When we pulled out of the town, I reminded myself of her first full day at school. The school picked. Full day kindergarten. Most of us took half days, but it’s a new requirement for the school districts, and we must have been one of the first. She took those first steps into the bus and started talking to the little girl next to her and did not notice that her parents we’re outside, watching and waiting for a sign that she was alright. The same happened on Saturday. We brought her to her dorm room, and she wanted us out as soon as we were there. The last we saw her was at Val Kill – home for Eleanor and where Amanda would spend most of her time. Ali started bawling. Amanda did not.
Yesterday, we went to church. The children that were in the Vacation Bible School performed songs and read. There were more children in the program than previous years, and the stage was packed. At first Isabella did not want to perform and then got up there and smiled away, although she was in the corner and sort of under the balcony. Joe read and I was very proud of him, and on our way home I told him it took a lot of courage to get up there. Emma Tess looked like she was just going through the motions. She was tired. Slept over her friend’s house the previous nights and explained to Ali she only slept 14 hours the previous nights.
So I’m here in Huntington. Let me go back to this weekend since it was the first time I saw JP Groenger in over fifteen years. My old friend from St Phillips is in the production – Much To Do About Nothing – I thought he was incredible. Jape has come a long way from the motorcycle, Harley Davidson bell bottom blue jean days…I would like to hang out with him and catch up after all these years and we just might to that. I brought Emma and Isabella since the performance was outside. I thought it would be a good opportunity for them to see Shakespeare. We brought chairs and snacks and overall had a good time. It was a beautiful day. A steady breeze blew through the trees and the clear sky without a hint of humidity was a perfect addition to the play. Afterwards, I went up to Jape who looked at me for a few moments, studying my face and not sure if it was me….Mike Gordon?” He was very warm and was excited to see me and more – so grateful that I came.
After the play we went home. I ate a lunch and went out to Riverhead to see a baseball game – Riverhead Tomcats vs. Long island Mustangs. This is a college league. The game was played at Riverhead High, just a half hour from home or twenty miles. By the time I got there the game was in the third inning. I saw one kid hit a dinger – in fact he hit the fence a couple of other times. Tonight the league is playing their all-star game. Last year I brought Isabella to the game and we saw a short stop make incredible defensive plays and hit two dingers. He’s playing for the Oneonta Tigers –Chris Sedon. I hope to catch him playing against the Brooklyn Cyclones this later next month.
So what are you writing? I was thinking of this story for some time. Oldest daughter is taking care of her sisters and brother while Mom is working. Parents are divorced. School is out and she’s finding ways to keep them entertained. There are chores and there conflicts. The oldest would tell stories and the younger sister and brother always ask her to tell a new story. It’s different from the others since I’m using my children as references. Isabella is always asking me to tell her a story, and normally it’s the same two stories I’ve told her before. This one would evolve since the oldest is creating a sense of adventure. I’m imagining the father as being a pirate who tries to kidnap the others. In reality the father is trying to get the kids back as the mother struggles – works two and a half jobs and the bills are just getting paid….
The train in pulling into the station and it’s time for me to write…
at July 13, 2009 No comments: