I grew old with REM 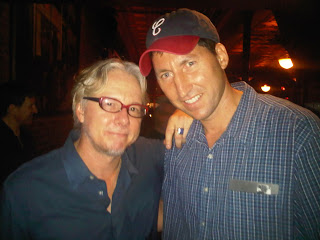 The Beatles broke up in 1971, we sat in the back seat without seat belts, and Ma was driving my dad’s 1969 faint yellow Chevy Nova on Jericho Turnpike in Huntington. The news broke that the band was calling it quits. Why?
Yesterday by habit, I checked Twitter and saw the NPR release after REM’s…calling it quits. I had to tell Ali and I dreaded it. It’s been a tough week, on Monday the doctors found a near fatal blood clot in her lung. She’s doing fine, had therapy today. On Tuesday night she told me this week sucked and yesterday, Wednesday, her favorite band breaks up.
The first time I saw REM was back in 1983 on MTV’s 120 minutes, the song was Radio Free Europe. It was a black and white and a rare appearance from Reverend Finster made the video mythical. In Rolling Stone there was a small piece on them, the fact they came from the same town as the B-52’s Athens GA. I walked more than ten miles to buy the IRS album, Murmur and their music changed my life. The lyrics, whatever martyr misconstrue meant and 9-9, Talk About the Passion, the album was not just one song which I heard before, it was the whole product. Eventually I saw them as one of the opening acts for The Police at Shea Stadium on August 18 that year. I remember the rain and hiding under a tarp in the outfield and clearly being one of the few in the crowd who knew the music. I grew up with the band. Eventually interviewing them for the high school radio station and seeing them perform at a local roller skating rink, the beacon, Nassau coliseum, Radio City Music Hall, Carnegie Hall, Madison Square Garden, and up in Massachusetts on their last tour. Last night Ali and I were discussing the fact we may never see the band again, but we have so many memories, of meeting the band back stage at Jones Beach and outside Carnegie Hall. I even wrote a novel using the lyrics from Mr. Richards and dedicated Killer Commute to the old dinosaurs from Athens. We passed our love of the band to our children who know their music as well as we do. We made the trip to Athens and have bought the rare and limited editions. We have a used drum head from Bill Berry from the Monster tour. We have all of these things, but the music will live on. Thank you for being together as long as you had, I can say we grew old together. I wish them the best in their own ambitions, and I hope there will be some benefit concerts in the future. There has to be more shows…right? I guess I can hope. On a personal level, the music has inspired our lives, as my wife beats cancer their song. Walk Unafraid is our anthem.

Thank you for reading this
at September 22, 2011 No comments:

Smile, You’re Traveling by Henry Rollins was the third installment in his Black Coffee Blues, which included Black Coffee Blues and Do I come Here Often? I feel this book was the strongest in the trio. It begins with the ending of a Rollins Band tour and Henry making plans to visit Kenya - since he has thousands of frequent flyer miles. The boldness of travelling alone is inspiring in itself, but the fact Rollins captures his intense moods, the cities, the various people, is well documented. The book captured my attention. It is one I could not put down. What’s disturbing is his realization the band is finished. The audiences are not coming out to see the band, and it’s not just in the States, but in Japan as well. Japan? In Eastern Europe he packs them in. You can read the transition and the anger growing and blowing out as the tour winds up. He is a conflict of interests. One sentence he seems not to care the crowd is minimal and the other he is hurling back beer cans and threats to the idiots. There is the sense of frustration since he is upset comparing his band and himself to the success of Beck and Oasis, poser bands…posers. Fake. They all suck! The reality is his refusal to accept the audience he could count on - moved on. The kids he despises, who should be removed from airport terminals and from experiencing African vacations, are the by- products of his aging fans. HIs fans made life decisions and moved on with their lives. Henry at 35 plus ++ strives to be alone, successful in his own terms, and to be a star in an ungrateful way. Let me be clear, Rollins is genuine and a true to man. I have more respect for him now than I had before, since beyond all of his internal bickering, he suffers from depression. He doesn’t let it stop him. His voice gives out a couple of times in the tour and he had to cancel one gig in Germany, but he feels awful to see the fans come to the venue and turn away after they learn the show was cancelled. He interviews Black Sabbath and Ozzy individually and watches them practice and thinks of his departed friend Joe Cole. Henry was genuinely excited to see Sabbath. He was also excited and had his doubts he could write the liner notes for Jane’s Addiction’s live album. But, the tragic loss of Joe really has an obvious effect on Rollins since he doesn’t want to be friends with anyone, “I don’t want to like anyone too much because it’s just another thing that could be taken away from me.”
at September 16, 2011 No comments: