Driving into the city last night was easy.  I didn’t rely on the Waze or the GPS.  I have driven in a few times to the Bowery Electric.  I felt confident in my sense of direction.   It’s perhaps one of my strongest traits.  Leaving New Hyde Park around 9 meant less traffic.  I drank a couple of beers at a farewell party – some salad and pint of water and I was off.  I was a man on a mission.  Onto the cross island and onto the LIE and then the BQE and follow the signs to Manhattan.  The sparking city was resplendent from the passing rain.  I found a parking spot, paralleled parked the Charger and walked a couple of blocks to the Bowery.  Turned left.  Pass some restaurants and a 7-11 and there it was.  Walked in, checked in at the ticket table.  Showed ID and headed downstairs.  Passed legendary Bad Brain’s guitarist, Dr. No, but was too shy to say anything.

The place was packed.  SubZero was on the stage.  They played the last two songs of their set.  The lights went on and a flood of bodies escaped into the night.  It was the time to climb into the heat.  I went in, stepped down into the pit and took a spot in the back next to the sound board.  I was safe.  I was back against a wall.

I was there to see Regulator which as members of Bad Brains and Cro-Mags.  Dr. No was warming up and high fived Mackie, the drummer of the Cro-Mags as he sat down behind the drums.  A content Daryl Jenifer, bassist for the Bad Brains, eventually was on the stage and warmed up as reggae music thumped through robust speakers.  It was a few minutes of sound check. The collected and anticipating bodies waited like patient monks till John Joseph, the singer for the Cro-Mags took the mic and asked, “How’s everyone doing?” Ready to rip.

The super group piled on the bricks of the Bad Brain’s classics.  Sailin’ on, Don’t Need It, The Regulator, essentially all of the songs off The Bad Brain’s seminal self-titled album, but skipped over the soothing (take a break from aggression) reggae selections.  They played House of Suffering off the album I against I and they nailed it.

Why skip the reggae?  My thoughts: the reggae songs were the influences from their singer (HR and his younger brother Earl Hudson) It was another reminder this was not the Bad Brains on the stage.  Not that it mattered to the crunching horde slam dancing, jumping, legs over heads, shoving the heavy and solid music board back.  The energy in the room raged.

John Joseph carried the tunes very well, but the strong vibrato, the classic pristine falsetto of HR’s voice was missing last night.  But considering where HR is now and what he has been up to recently – performing solo shows to some harsh criticism, even his voice can’t match its peaked past.

Regulator may be flirting with our nostalgic heart strings.  Is there a possibility they will continue as a band?  I was surprised how short the set was - as well as no encore. There were so many songs left to play and there was the expectation they'd play for an hour plus. I'd say they played for about 45 minutes.

Before closing, John Joseph thanked Jesse Malin for hosting the event.  He explained why we were there – it was a benefit concert for Children’s Tumor Foundation.   Even on his FaceBook page he stressed even if you cannot make the event, you can make a donation to the foundation and suggested buying a T-Shirt on the way out.  All of the money is donated to the foundation.   I will share a link within this post.  Enjoy the pictures.

Thank you for reading this.
Children's Tumor Foundation 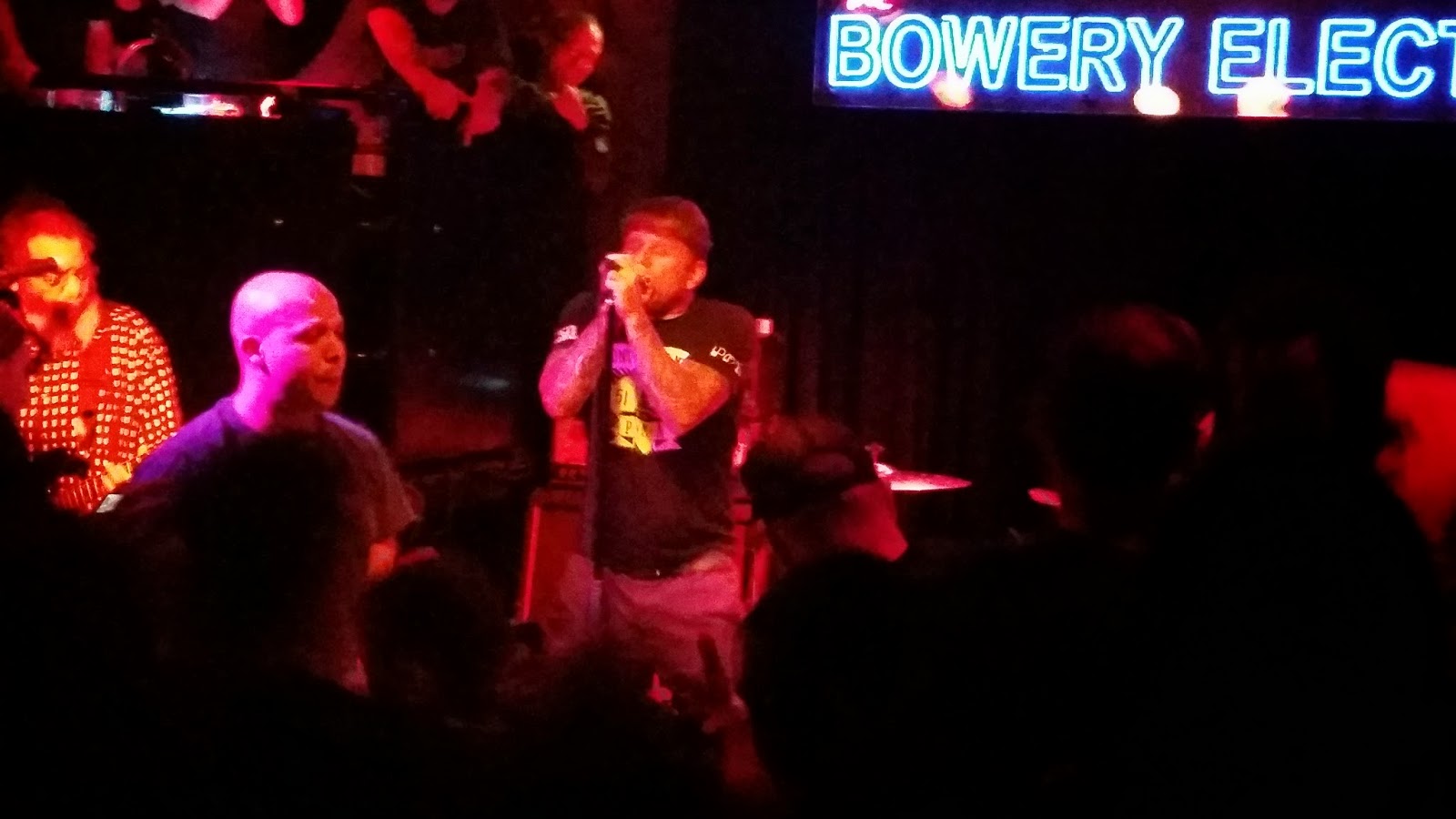 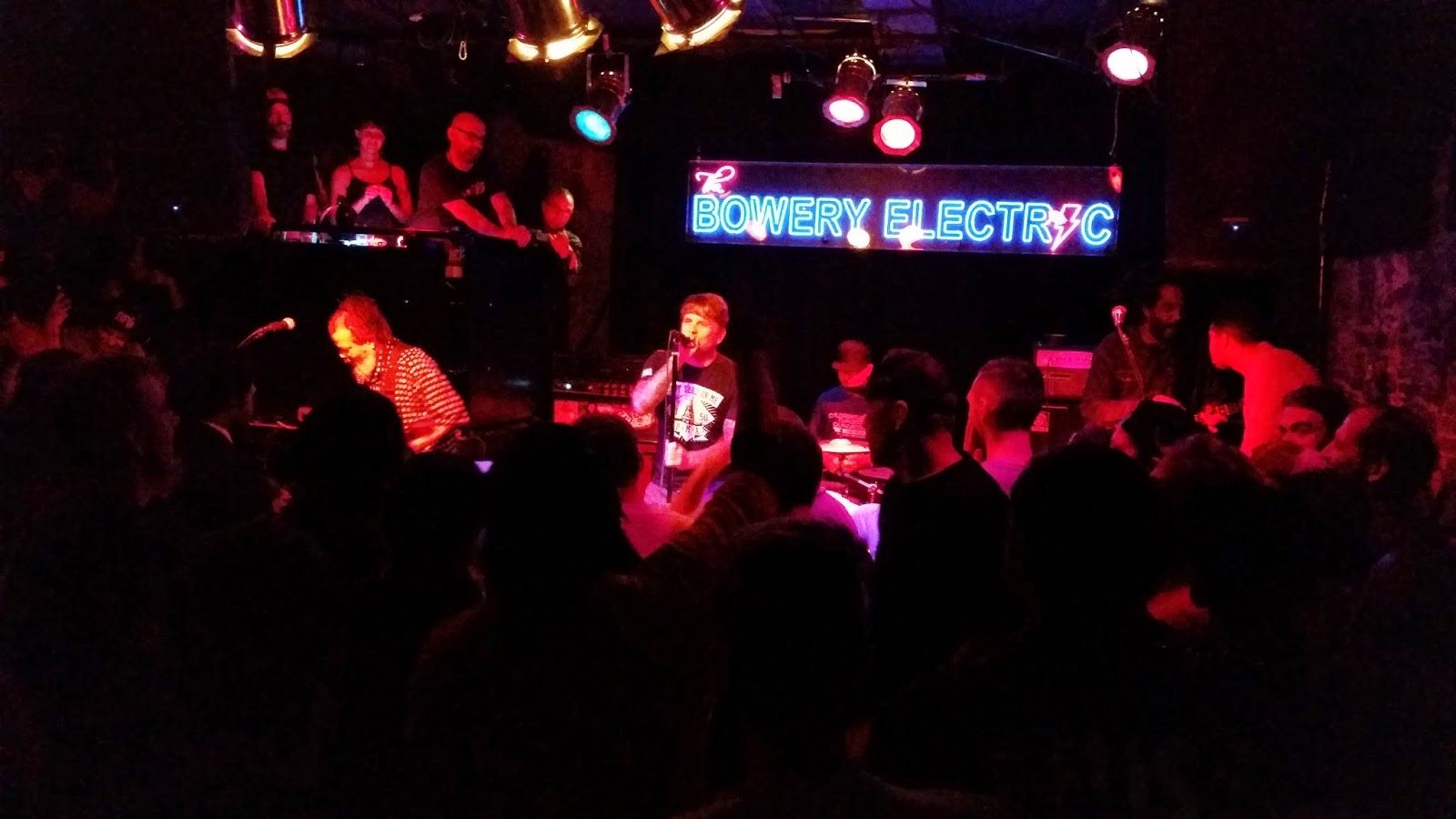 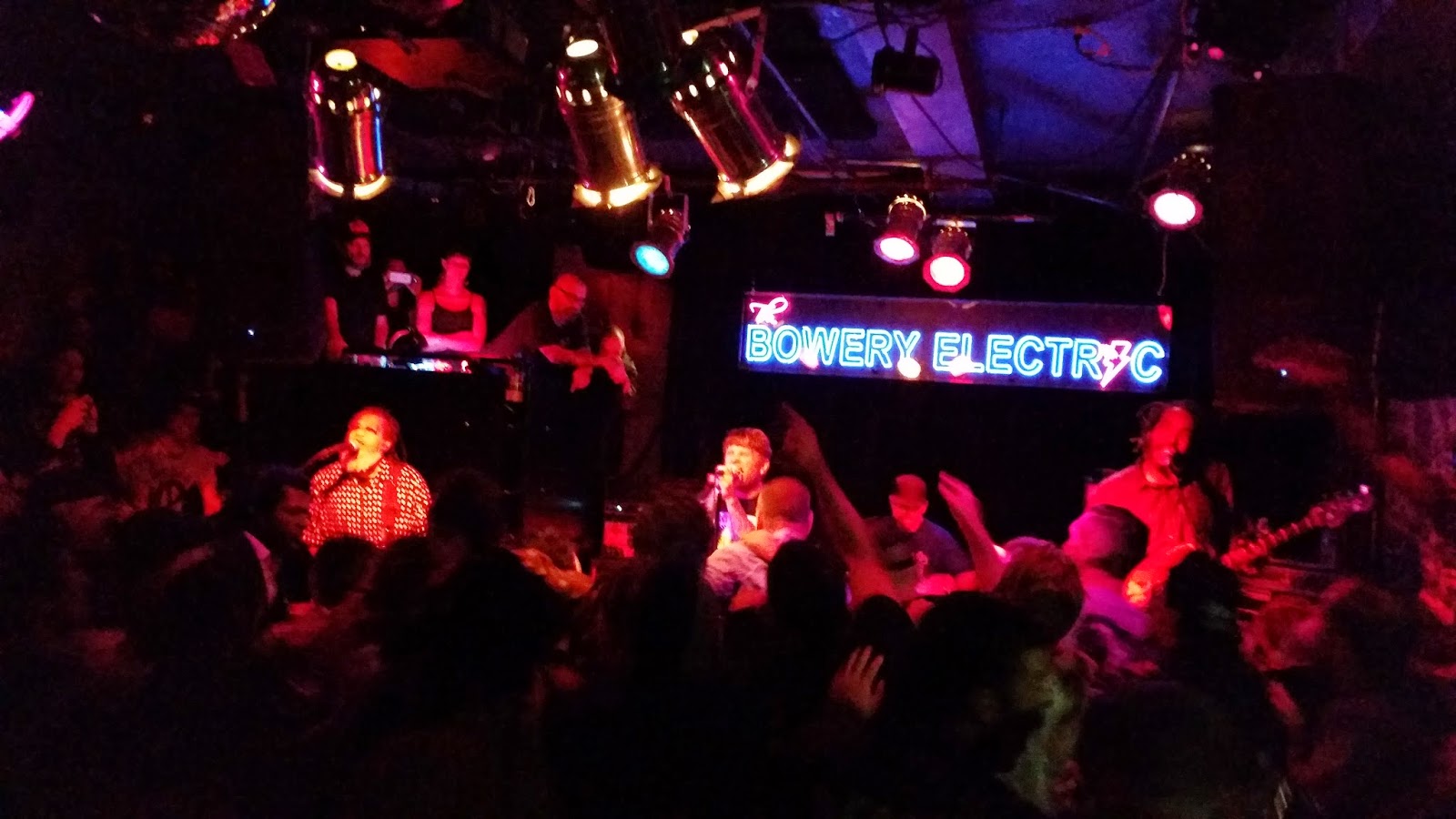 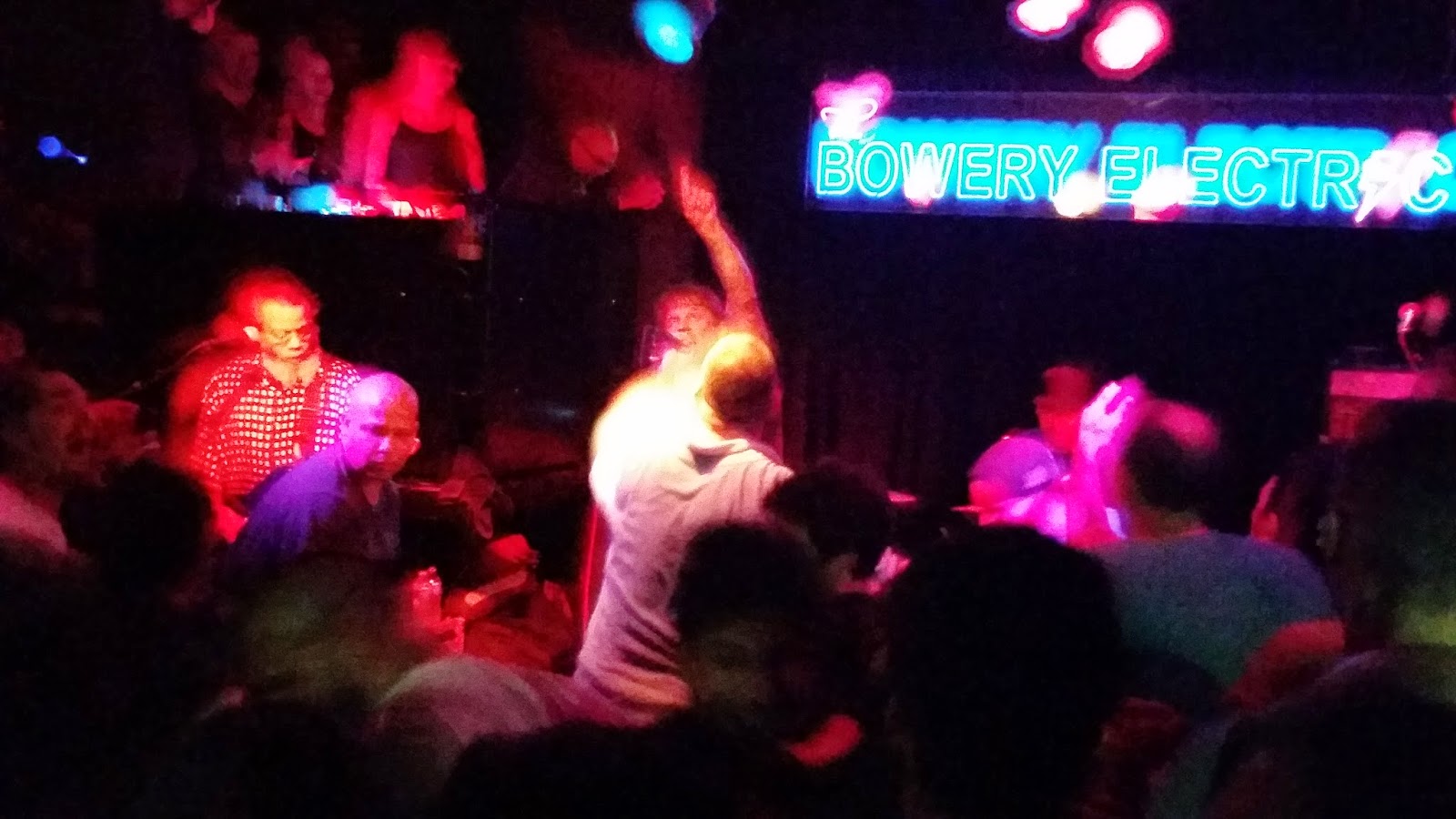 Kids Don't Follow! And We Can't Stop Getting Older...The Replacements at Forest Hills

Last night was one of those events that met all expectations.  It doesn’t happen very often.  There is the height of anticipation of the first kiss only to meet dry lips or the closing on the house and learning there are chickens in the attic or meeting that one person who you thought would be inspiring and so insightful but instead were dreary bores.  Before we got in Mike T and I bumped into Rhett Miller from the Old 97’s who literally came out of a porta potty and was drying his hands.  Mike shook his hand first and Rhett jokingly said now my hand is dry.  He was appreciative when Mike had mentioned seeing some of his solo performances at Fez so many years before.  He was also pumped for seeing The Mats.
So, let me share this event.  After decades of listening and dreaming of a Mats reunion it occurred.  For the legion of fans we know why it was nearly impossible, Tommy Stinson the Mat’s bassist was in an exclusive contract with Axyl Rose and Guns & Roses.  The chances for a Replacements reunion were slim.  The second lead guitarist, Slim Dunlap had suffered a debilitating stroke.   But it happened.  The first reunion shows were last year in Toronto and Denver. In more than twenty something years, Replacements were on stage in New York.  Their everlasting goof ball ringleader, Paul Westerberg wore a yellow clownish blazer, red knickers, and knee socks.  He took a guitar and had a smile that could part the red sea.  Tommy Stinson stood to his right and was almost ready.  He fixed the microphone stand and cursed at the roadies, “What the fuck?  Why is this so short?  I’m older and taller.”  Tommy was twelve when he started playing with his brother and the rest of the band.  At the cozy Forest Hills Tennis stadium in New York, The Replacements were tight and efficient.   They ripped into Favorite Thing off their Let It Be album (Twin/Tone) and then Taking A Ride off their first Twin/Tone album, Sorry Ma Forgot To Take Out The Trash.  I was a few rows back from the stage until nature called.  Excuse the interruption, let me get this off my chest; from this vantage point in front of my computer and a day later. I can hear some groveling.  These are the whiners, the hardcore Mats fans who would not dare set foot in front of this semblance of the band.  The Mats were once and this band is a fraud.  Without Chris Mars, their former drummer or Bob Stinson, their former lead guitarist, the band as The Replacements for these ardent and stubborn fans is not truly…authentic.  I heard some of the skeptics.  I looked around me and noticed all of them were singing to the music and pumping their fists.  Listen, Chris Mars refuses to play with the band and sadly Bob has been dead for twenty something years.   Get over it.  For a couple of hours we linked the past to the present and suddenly everything was right in the world.   Each song evoked a burst of energy, but for me there was one particular song which ripped my vocal chords, that was their classic howling blues "White & Lazy" off their Stink EP.  I understand they have not played this song very often. I called out for it when I was in front of the stage and this is my hunch, my faint voice was heard.  I noticed Tommy approached Paul and perhaps suggested a different song; Paul waved his head and picked up the harmonica.  Maybe he thought, “No, I heard some tall guy in the front call out for this and he will get what he called for.  Here’s to you tall guy with the big nose.”  Yeah, I can dream.  Too band I can’t post my video for you all to hear my singing and see The Mats from where I stood.  The song did not get the full or even half of the audience’s response. I assume there were some who heard the song and asked what the fuck is he singing?  Is this a white racist song?  Far from it.  If it was, I would not be a fan.  "I can wake up in the morning and stay up in the afternoon"…there is a link to the set list from last night, which includes, Color Me Impressed, Taking a Ride, Waitress in The Sky, Bastards of Young which is the anthem for The Replacements, “The ones who love you least are the ones you die to please.  The ones you love you best - are the ones you laid to rest, if it’s any consultation I cannot begin to understand.”   Tommy said they had to shut the show early since the neighborhood has an enforced policy, “What can I say? We need to pull the plug at 10 PM.”  When I strolled out into the streets, I was surprised by the robust presence of the police.  There were mounted police who looked menacing, eventually galloping off to battle some night creatures in Kew Gardens.  Why the full force? It was just us older - meandering middle aged punks who drank a few beers and perhaps appeared slightly inebriated to the neighbors. Was there really a need to have a battalion of cops ready or was it the distant threat - that if we acted like the children we once were - we would be severely punished.  It was the slap in the face, the voice over the loud speaker…hello… the party is over...do yourself a favor and listen to the link below, Kids Don't Follow and you'd get the reference. 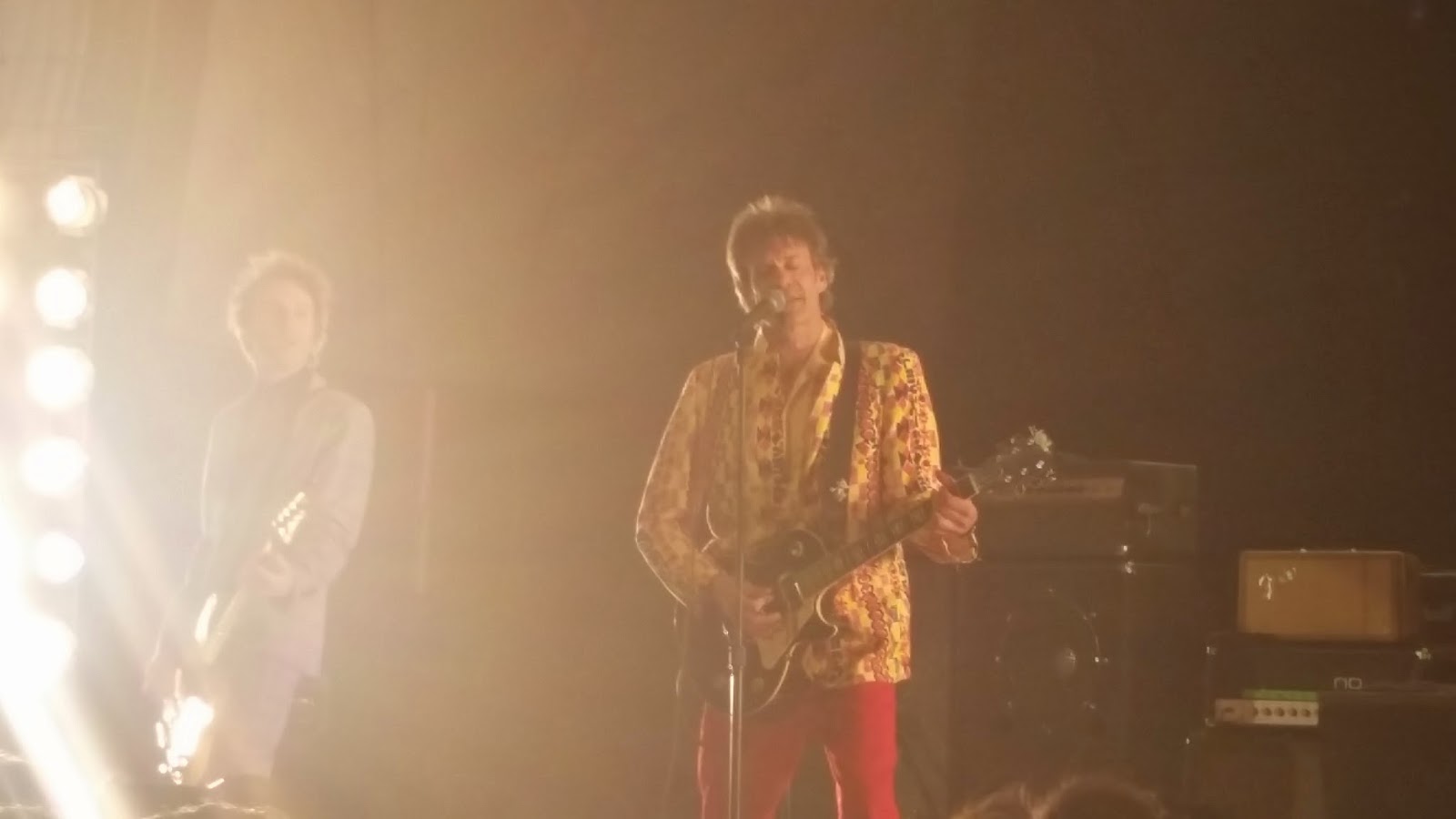 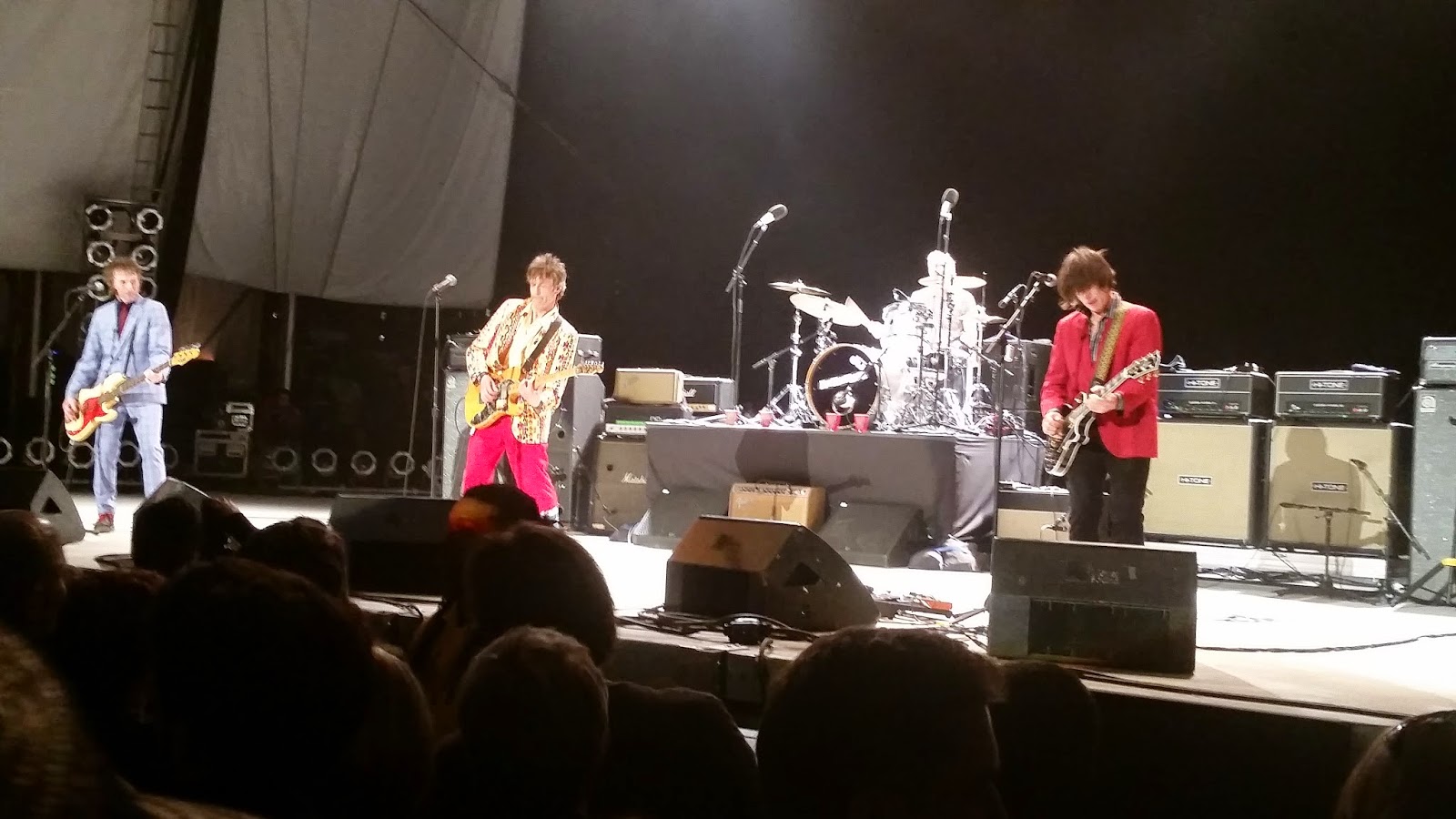 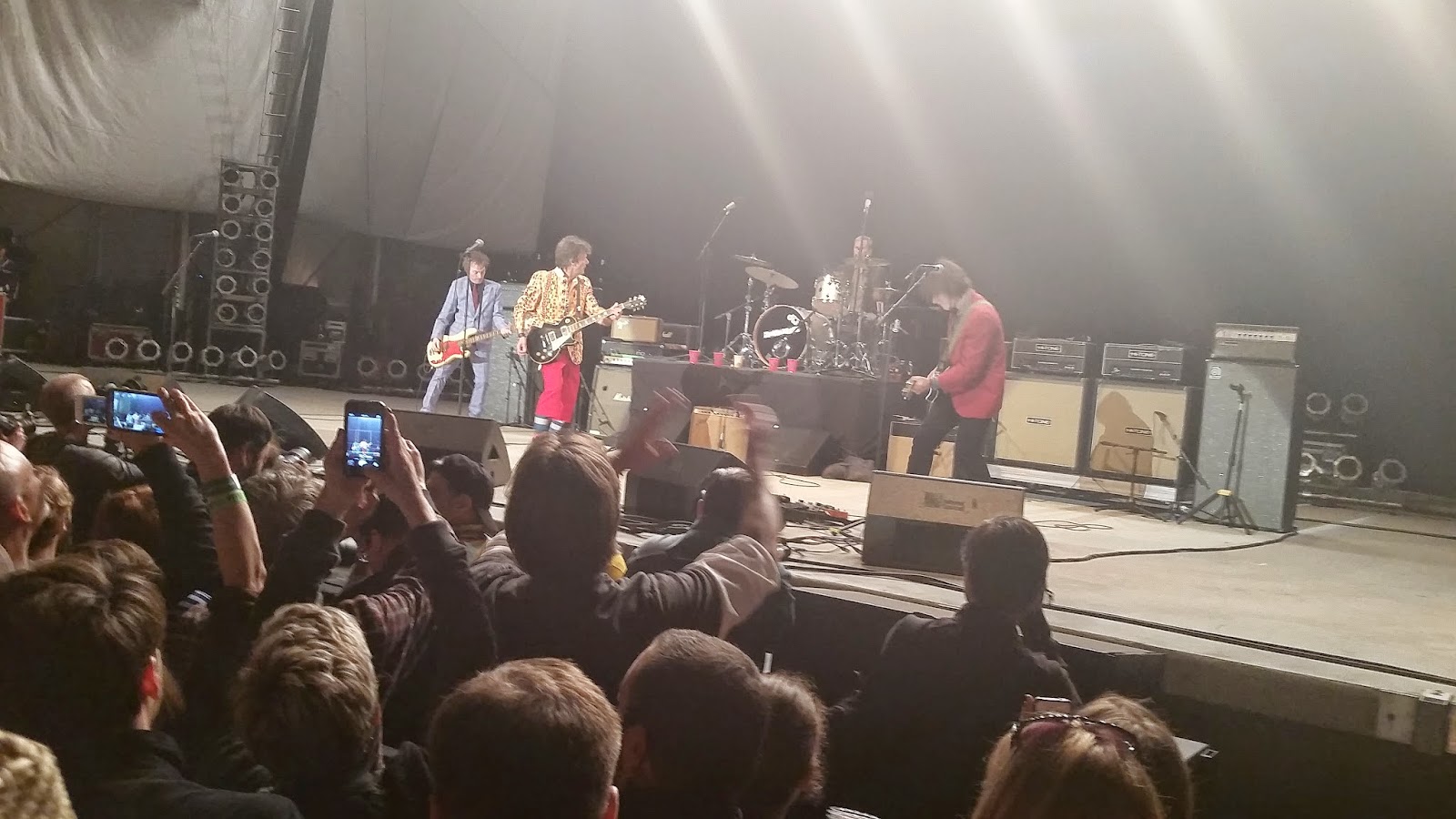 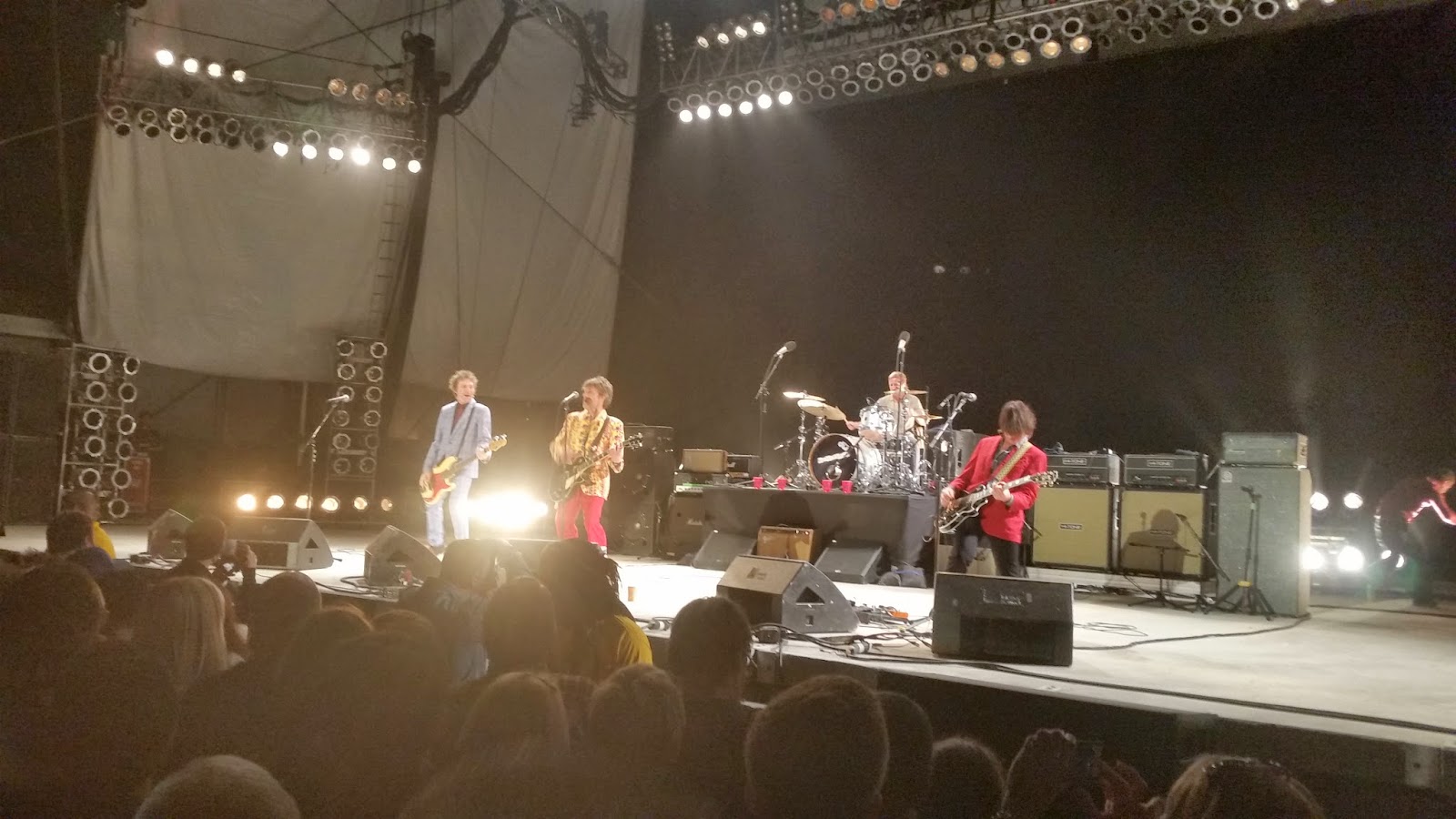 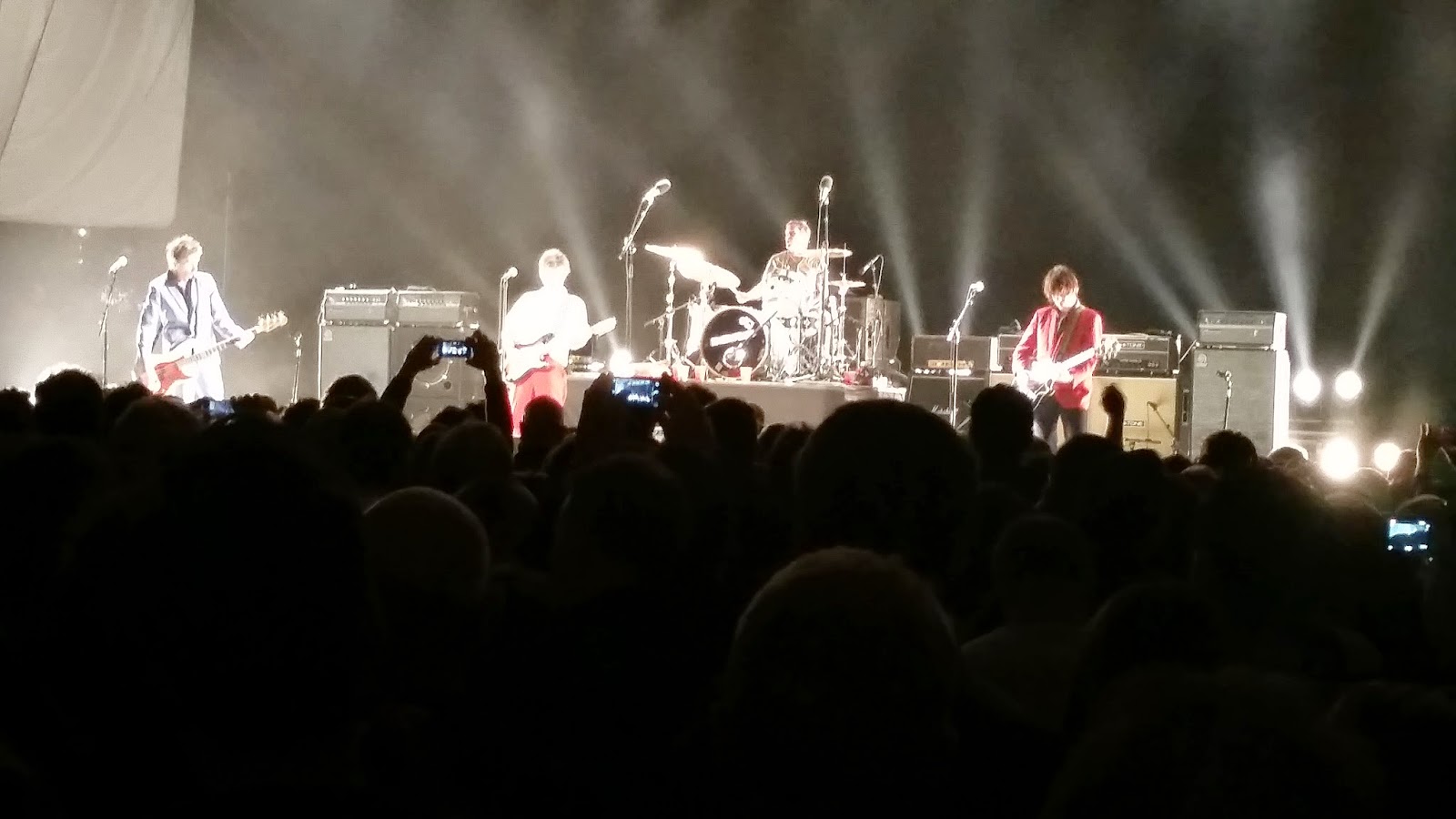