Henry Rollins is a sell out 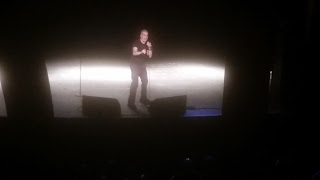 I heard the criticism about the Henry Rollins for years, a self-absorbed, macho, and of course a lunatic.  I have a friend who were threatened by the Henry years ago.  I have read his articles and books, and would say I am a fan of the Henry; the myth which he created when he adopted a different last name, "Rollins" when joining Black Flag.  I always respected the Henry who would tell us at his shows that he was accessible, since he had the punk attitude; there is no difference to the person on the stage and the audience, we were united.  “I am here because of you,” the Henry tells his audiences. You could send the Henry an email and he would respond which is respectable and follows the punk ethos.  When seeking advice, for instance, on books or on bands such as - should I see Suicide who are playing in the city? The Henry thought it was a good idea and I went.  And I walked out before the concert was over.  Their last concert.  The Henry removed his email address from his website, no more direct contact with the Henry.  Last Sunday, I saw the Henry in Philadelphia and was not impressed.  He seemed sort of out of place on the stage and I left the show before it was over.  But before the show, I received a promotion from the TicketWeb pitching a special Q&A with Henry.  For $125 I could ask the Henry questions after the show, get my picture with the Henry and a signed laminate from the Henry.  What happened to the accessibility?  Now the Henry will charge you.  You think this was only for his fans in Philadelphia?  Not quite.  The same promotion was in-place when I was saw him in Westbury.  For $125, I could meet the Henry and ask the Henry a question.  I ignored the promo, brought my books for his signature to the gig - since I’d like to have them for my or the Henry collection.  The show itself was full of rehashed stories which I heard over the years and yet he added a new twist on his tip toeing around his sexuality, since he has been friends with Ru Paul for years.  Who cares?  He is seen hanging out with Ru Paul and the stories fly around the web that they are an item. The Henry received an email from a distraught fan.  Sounds like bull shit to me.  Listen, you are on the pride ride or you are not.  Either way, I don’t care.  It takes guts to tell the world you are gay.  It also takes integrity.  So, after the show I go back to the shiny monster tour bus for the Henry. I see his manager, who makes an announcement to the five of us standing around for the Henry, “Sorry fellas, the Henry is not coming out due to liability and management contracts and etc.”  Wait, you mean to tell me he’s not coming out, but if I paid $125 I could have met him after the show?  First he denied it and then made up some shit that was only in Philadelphia.  Henry Rollins, you lost this fan.  You’re a sellout.  You’re gouging your fans for all they can give.  Go on repeating your stories around for the rest of year and try to get on another ad for Calvin Klein.  You said it, you are a whore.  Your words.

The Long Island Ducks lost the championship in a barren stadium 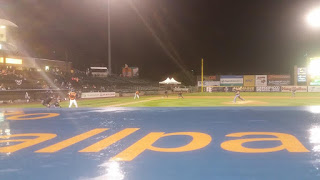 
My apologies for the lucky five who read this blog on a consistent basis.  This is one I wanted to get in before the baseball season is completely over. This entry is about the Long Island Ducks who were swept in the Atlantic League Championship at home by the Sugarland Skeeters.  The week before the Ducks were selling playoff tickets for $5.00.  Ali and I took Joe and Bella.  Big spenders.  I was surprised there was a small turnout.  Five bucks for a playoff game…on the weekend?  Why?  But I guess the weather was a little chilly for a few fans and most decided to skip it.  They missed a good game, the Ducks won, tying that playoff series against the Somerset Patriots. I decided to take in the deciding game the next night to see if they could pull it off and they did.  Again, there was minimal fan support.  Why?  During the regular season The Ducks sell very well, so I was surprised.  I assumed their fan base would be there.  Instead, I saw the same kid with the green face, the other kid with a mitt who looked too old to be chasing foul balls.  I was like you, so don’t let anyone discourage you brother!  Get the ball.  Later in the week, I bought two tickets behind the Ducks dugout for the first home game in the championship series.  I thought Ali or Bella would join me.  Skeeters won the first two at home and it was a best of five.   The weather was miserable.  Rain was off and on and it was a crappy day.  I called the stadium to see if the game was on.  Yes, was the answer.  Great.  No one wanted to join me, so I walked in and grabbed a beer and took a seat which was dried by the usher with a damp towel.  The Ducks looked like a different team.  It turned out that it was the last game of the season.  The Skeeters won and celebrated in a near empty stadium on Long Island, far away from their Texas fans. I watched them jump on each other as I walked out with a dozen or so miserable fans.  Why did I go?
at October 16, 2016 No comments: