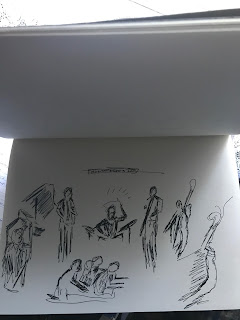 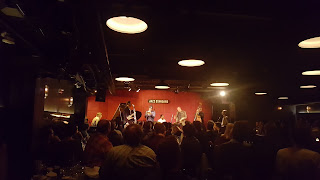 For those of you who have not seen Brian Blade, I strongly recommend blessing your eyes and ears to see this man rip over a simple drum kit.  He is an artist and has formed a compact group of musicians who will whisper to your angelic soul.
There were a couple of tickets available for the last night’s gig, Brian Blade & The Fellowship band played at Jazz Standard.  It was the last show after a five night run.
I went into the city with a friend.  Another sober friend who has been blessing in my life.  I brought my sketch pad.  Found a parking spot a few feet away from the entrance to the club.  We went in and saw Brian standing against a wall talking to someone.  I put my coat down, excused myself and brought over the pad to get the man’s autograph.  He was at the bar by the time I got back and I spilled out how I was going to sketch and how many times I’ve seen him.  I was like a little kid telling Mr. Blade how much I respected his work.  He was soft-spoken and sounded surprised that I’ve seen him as many times.  God bless, were my parting words.
I was back in my seat, the light dimmed in the house.  The band took their places on the stage.  The music began.  Seltzer with lemon, one for me and one for my friend who was excited about a night out.
The band was tight, Jon Cowherd on piano, Myron Walden, alto sax, bass clarinet, Melvin Butler, soprano and tenor sax, and the ever present, cheering Chris Thomas on bass.
Not knowing the music which was a mixture of free jazz, fusion.  At first it was a slow somber setting, but the music increased in energy and pace.  It leveled off once again.   Jon Cowherd merged so many styles and yet each song spoke to me.
Eventually, the set was finished.  Brian spoke, introduced the band, and told us what they songs were played and said God bless.
They came out for an encore, This Little Light.
The show was over.  Paid the bill and we were back in the car, passing streets and steaming street caps. Heat kicking on.  Dodging taxis who were out to kill me.  The gigantic Met Life building, and drove over to the East side and up and over the 59th Street Bridge.  The shimmering water, the colored lights on the water, the cold water leads to the endless ocean, and the twisting roads led me to the Long Island Expressway.  Think it would be a breeze on a late Sunday night?  Think construction.  Think Northern State.
After walking down the driveway, just before going inside, I stood outside in the frigid November air and gazed up at the stars.  Their lights.  The cold air.  I thought of the music I heard, and imagined Brian Blade smiling up at a different ceiling.  Good night.

Ravi Coltrane at the Village Vanguard 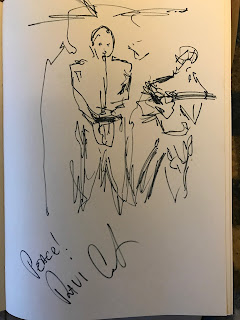 Sunday morning.  There were a couple of goals I needed to complete, a walk in the woods.  The VA woods which I used to walk and ride my bike in, before mountain biking was popular.  I had a BMX bike, but I would ride a Schwinn Stingway or a ten speed with thin tires through the woods if I didn’t have anything else.  My BMX had a plastic cover across the handlebars that said, Disco Sucks!
This was the place where I brought a BB gun to shoot unsuspecting birds and squirrels, rabbits, the last two with a pellet since the BB would pop off them.  I was an amateur hunter with my lab mix and a few disturbed friends.
A middle aged couple were just leaving the woods as I was entering.  The woman wore a helmet.  I felt like telling her, when I was a kid riding through here, I didn’t wear a helmet.  I let her go without insulting her, besides she said hello to me, so I should be nice.

The paths are the same, but the woods are smaller than what I remembered.

A soccer game in the distance, fierce fathers shouting from a half mile away or more.  Their voices carried through the silence of the trees.  Moss on the sides of the path.  Leaves lingered on autumn branches. I closed my eyes and just listened to what the woods carried.  What memories this place held, what secrets did it want to share.

When my knee is back, I will go running in here.  I’d like to find a long trail and just go.  Me and my water bottles and a snack.

The day before I drove up to Hyde Park to pay my respects to Pierre Teilhard de Chardin.  He was a French Jesuit priest who inspired countless soul seekers.  Controversial in his time and yet renowned.   He is buried on the grounds of the Culinary Institute of America - in what was a Jesuit seminary.   “You are not a human being in search of a spiritual experience.  You are a spiritual being in search of a human experience.”  Here is another, “It is our duty as men and women to proceed as through the limits of our abilities do not exist.”
I ate a delicious and late lunch in the school’s tavern.

I drove back to Long Island in silence.  Passing dark hills and listening to the hum of the tires.  I saw a sign for Purchase College, where I met Ali almost 27 years ago.

De Chardin: “Someday after mastering the winds, the waves, the tides and gravity, we shall harness for God the energies of love, and then, for a second time in the history of the world, we will have discovered fire.”

At the end of certain stages in our existence, we discover a new beginning.

I wanted to drive into the city to see if I could get a ticket to see Ravi Coltrane who was playing at the Village Vanguard.  I’ve seem Ravi a few times, but this place holds history, is very intimate – only holds 120.  Last time I was there was to see Charles Lloyd.  I changed my mind and headed back.
This leads me back to the first paragraph, welcome back to Sunday.  All of Ravi’s shows were sold out at the Vanguard.  I sent an email, called the Vanguard, and thought of sending an email to his manager, yes I was getting obsessed.  I was on this spiritual journey and seeing Coltrane would put the comma where it had to go, keep on searching.
When I got back from the walk, I received an email, there was some cancellations for the 8:30 show.  How many did I need?  One please.

Driving into the city, I get excited each time I'm driving on the LIE and can see the beautiful Manhattan skyline.  It was a clear night.
Twenty minutes later, I parked and was walking down the old stairs to the club.  I gave the house manager my name, his face is heavily scarred and wore a heavy grey sweater.  I was brought to my seat, after explaining I’d like to sketch.  Jazz brings out the creativity in me.

I’m a mediocre artist.  Not too shabby for someone who rarely sketches.

A mother and her teen aged son sat across from me at the same table.  They were in from Chicago, visiting schools, NYU, Columbia.  I was impressed with the kid’s knowledge of the various jazz trumpet players.  He looked like he was twelve and I thought of my son, visiting schools.  I couldn’t imagine sending him to Chicago.

Ravi and the band came out to a sold out house.  We were packed in.  I could not believe how close I was and I sketched away, but could not see Eric Harland, the drummer.  I tried but to no avail.
Looking at Ravi, I saw his father so many times, his eyes scanned the heavens, his cheeks blew out, his long thin fingers raced across the instruments and yet there was peace in the room.  There was a sense that we were all a family for this period of time.
After playing for close to an hour, using different instruments, the guitarist was brilliant - a British term which I will use here.  The young bassist held a smile throughout most of the set. Ravi closed the show with a Charlie Parker original.  Ravi brought down the house.  The lights came back on.  I had a chance to talk to Ravi once again and am impressed how genuine and humble this man is.

“Nothing can resist the person who smiles at life - I don't mean the ironic and disillusioned smile of my grandfather, but the triumphant smile of the person who knows that he will survive, or that at least he will be saved by what seems to be destroying him.” Pierre Teilhard De Chardin
Read more at: https://www.brainyquote.com/quotes/quotes/p/pierreteil752982.html 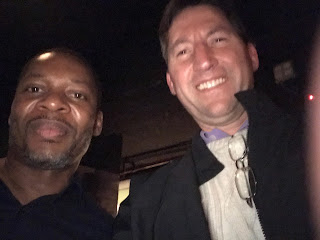 Running the Suffolk County Marathon in the rain!

Picking up my pace and seeing the actual finish line, the crowd, one of my targets was ahead of me and I ran as fast as I could and pulled in ahead of him.  I beat him.  I finished, but not with great time.  I significantly surpassed my intended goal, and yet it was a miserable day.  The race was over. I was starving.  Grabbed a banana and bagel.  Was given my medal. Eileen came over and pictures were taken.  Let’s get out of here.  Ali texted to congratulate me and that made my day.
Maybe next year I will run THE New York City Marathon.