Black Coffee Blues by Henry Rollins is disturbing. The repetitive violent themes revolve around suicide, homoerotic fantasy, murder, and an overall misery. There is really no concrete fiction to speak of since this is a collection of random and disturbing thoughts. Henry likes to shock his audience, but the most disturbing features consisted of at least two incestuous depictions of a father and son. Did his father try something? This thin collection was the least of my favorites as I swim through Rollins this year.
at April 30, 2011 No comments:

My business trip to Brazil 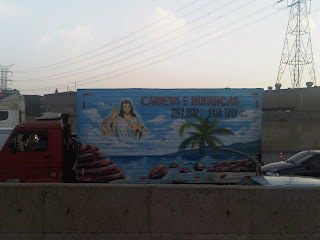 4/25/11 1602
To get the blunt honest truth give me a couple of drinks and we’ll start the tour of San Paulo Brazil. Compare d to Rio, this is where the work horses come and feed on their scraps. Where grey clouds followed me from New York, where fucking think prick motorcycle drivers abandon the rules of the road and cut in front by inches in front of smoldering bumpers, where rotting dog carcasses, their fat basking in the sun boil line a highway. This is where the buildings are grey. Consume me Bohemia beer, meat, Novilho de Prata flesh of the metal cords, the men come to the dinner to slice off the once living blood. The creatures crawl in high heels, a warm breeze blows through the room and I consider sleep and more sleep and more Bohemia beer and the Cuban cigar I can sit and meditate outside away from the churches, you shouldn’t do that, “That’s what Sister Ray said.” The smoke of distant ghetto fires where the hunger to survive corrupts the youth. You shouldn’t do that, burn away the wood and fall asleep in ghettos.

Getting to the airport was an ordeal. There were two accidents that slowed traffic to a crawl. Motorcycles cut in and out of traffic; some sped down the highway as if they didn’t care if they hit anything, dead dogs, shit on the road. A river cut through the city, shit floated on the top. Small brick buildings, shanty downs, a clothes line under the highway overpass. Some sold water in the middle of the highway and had to ward off the motorcyclists, like gnats.
This morning dealt with a hangover. It’s been a long time, happens with cheap drinks, sugar.
Writing this on board the flight before we take off, sitting in business. As my coworkers get in the back, I told them I asked for the emergency row for more leg room, but an upgrade was in the works. This is nice, I’ll sleep tonight. Misery loves company.

4/30/20:40
Back home. Got back here early this morning, there was little traffic at 6:30ish on a Saturday. The driver wouldn’t shut the fuck up or listen and took my $20 tip. Will never see him again. Ali was up and let me in; I was shot and stayed awake for a couple of hours. The trees are close to full bloom. Saw Amanda first and she was excited to see me. Joe came up and gave me a big hug, and then Bella boo. Emma came downstairs a little later and I gave their gifts to them. Fell asleep for a couple of hours and got up, walked to the gas station for the lawnmower and cut down the long grass in the back. I’m beat. Tomorrow, taking Emma Tess to Boston to see her band, 30 seconds to mars. Lord have mercy.
at April 30, 2011 No comments: 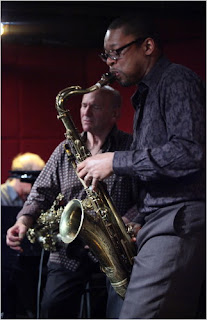 Jazz Standard this past Wednesday was sold out for two shows. It was a rare treat as some masters of jazz played Coltrane’s first Impulse release Africa/Brass. Here’s my dilemma since I can’t say if Ravi Coltrane was the headliner. The occasion was a celebration of Impulse records. An amazing group that consisted of the gentleman Cecil McBee on bass, the pugnacious Dave Libeman on sax and flute, Billy Hart on drums and the blessed Phil Markowitz on piano. Mr. Liebman made a comment that Joe Lovano was supposed to be there? I vaguely remember seeing the schedule couple of weeks ago, and seeing Joe’s name. In the audience was the owner or Impulse, Ashley Kahn who wrote a jazz book on Impulse and Coltrane’s Love Supreme. Mr. Kahn was speaking to Ravi before the show, while I stood to the side trying to get a word in. I did and we spoke about the house in Dix Hills and what did he say? We’re all volunteers and there is only so much we can do…
I was lucky to get a ticket. I got there early since doors opened up, parked across the street, and made waited on the staircase for about 15 minutes. Not bad considering I drove out from New Hyde Park and made it through the tunnel in no time. I found a seat and asked a foreigner gentleman to please keep an eye on my seat. You understand don’t you? Of course, I will be back. And when I got back to my seat - my close seat - I sat across from a man who introduced himself, my name is Kevin. My name is Mike and we talked jazz and had a beer or two and we shared stories, how old are you? I’m 45…saw Miles in Berkley and at Indigo Blue here in NY City and did I mention I saw Betty Carter? No? Amazing, at the Bottom Line, Freddie Hubbard jumped in on one of the sets. Did I tell you? Jimmy jazz. Kevin is the editor-in-chief of the Daily News, no way. Kevin and I hit it off and I watched him in deep Zen like meditation take in the sound, how appealing a band without an orchestra. How? imagine.
I was a shit and had to piss, and got up in the middle of the show, it was fuckin painful sweat was pouring out of me…awful. So, Kevin picked up the tab, my friend you didn’t have to do that. Really. Don’t worry. Before you go, I have a pitch for you. Cover Ravi coming back to his house in Dix Hills and sharing his memories, I like it, but that’s not something I would edit, no - you’d need the features editor. Imagine if this works out.
I drew two sketches of the show, and had the men sign it. I will look so cool framed.
at April 22, 2011 No comments:

This past Saturday I went to the library to pick up a CD and to find a good book to read. The day before I finished Knut Hamsun’s Hunger while riding the train back home. I’ve been on a mission to read more often. In the past I would consider Bukowski’s Post Office as one of my all time favorites. I took out a paperback edition and read the whole thing in one day. For me that’s quite an accomplishment. My wife, Ali can tear through a book if it grabs her. I enjoyed the book, it was a good story, but was disturbed by the Bukowski’s alter ego, Henry Chinanski brutalized women, referred to his girl friend as bitch and the outright rape scenes. What sucks is that every woman wants to fuck Henry. To depict all women this way is an insult. This book was published in the era of women’s rights, bra burning and sexual equality, but this book kicks all these rights in the ass. Instead of getting distracted by this, I’d like to point out that his writing is bare minimum, straight shooter and at times had me laughing out loud. His boss was a sadist. They worked Henry to the bone. He played the horses. He was written up countless times by his superiors for any infraction, but he didn’t care and this is what appeals to most, his fuck you attitude. You can say its punk, but this was written by an older man at the insistence/encouragement of his publisher, John Martin who felt a novel would be more marketable. Poems could only sell so much, and I think Post Office was his first novel.
at April 19, 2011 No comments: 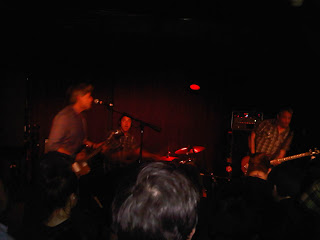 So a couple of weeks ago I’m checking into the best radio show on Long Island Finn’s Revolution Tuesday Nights on WUSB. His guest was the legend Mike Watt from Minutemen and firehouse fame who released a new album, Hyphenated Man on his own record label, Clenched Fist. Do your ears and soul a favor - order a copy. The progressive, complex and erratic album is in your face – bold! Each song flows like a rock stuck deep in the grooves of a tire - smacking the pavement on a lone Nevada highway. The songs follow you. You know it’s there and it sounds like it belongs, that’s Watt – he belongs in our ears. On the radio, Watt was the wise master who spilled wisdom to the listeners, only possible by Finn’s knowledge of punk history. During the interview, there was a contest to give out copies of the new album and then another for tickets to see Watt and The Missingmen at Mercury Lounge. I won a copy of the CD and received the copy and the tix for the show the night before seeing them at the hollowed Maxwell’s in Hoboken, NJ. Eric and I rode in and passed under the tunnel and popped out in Jersey, took the first exit and took in the sites of the small city as we searched for parking. That took longer than driving through NY City! Anyway, we made it inside and saw the opening band. Ah, who was that? They were tight.
Inside the black walls, Mike Watt made his way to the stage - slowly with a limp through the crowd, wearing a yellow windbreaker. Once he hit the stage the cheers rose. The room smiled with Mike and the band played hyphenated man for the entirety – 30 songs and some Minutemen covers on the encore. Watt, standing stage right - in the back – shadows - had a black brace on his knee, but he bobbed and weaved – stood strong like an anchor - through the whole set and even bent over – played - behind the wicked basher drummer, Raul Morales. The amazing/screech guitarist, Tom Watson rocked into a sweaty frenzy.
So after you buy the album, you need to go see Mike Watt and The Missing Men. Here are five of my favorites off hyphenated-man.