New fiction, living near the beach

Working on this piece of fiction:

The ceiling fan was on slow, spinning under the dark ceiling, the fan he has used to settle his mind was turned off since it was chilly with the wind coming off the water.
The beach is a five minute walk from the cottage.  Yesterday, he took a long run, fifteen miles to prepare for a half marathon.  After the run, he changed and walked down to the beach.  No one was in the water, it was chilly.  The water was dead low and he gingerly walked as far as he could, stepping over rocks, considering there could be shards of glass somewhere and a deep gash could be an emergency.  There were no broken bottles, but there were a lot of rocks and the further he walked away from the beach, the more rocks.  He assumed the water would get deeper.  It didn’t, staying up to his knees.  Looking out into the water, it appeared it was shallow for another 100 yards. Instead of trudging further out, he found a spot and plopped his body into the cool water.  The water was warmer than the air, and he wanted to stay in for as long as possible.  The tide was coming in, but it would be hours before he was able to run into the water and go for a real swim, perhaps the summer was over he thought as small waves crashed around his head.
This was supposed to be the place he could walk down to the beach at any time and get in a swim.  He could count on one hand how many times he went swimming over the summer, well maybe seven which is closer to the truth.  The sky was clear, the Connecticut cities across the Sound were clear, he could make out buildings.  He was the only soul in the water and to the folks walking on the beach, wearing jackets, Martin looked like a man desperately capturing the loss summer.  Typical for him.  Always clutching onto to the last bit of summer.
Standing up, the swimming suit was cold against his penis.  The rocks he avoided were under his toes, and yet the water was clear enough to make out the dark objects under the salty surface.  He dressed quickly, walked back up the beach, found a broken Becks bottle of beer and tossed the shards into the sea grass, away from any unsuspecting foot or potential beach blanket.
Walking back to the cottage, he had one thought, taking a warm shower and yet there was the thought that the ever present homebody, Wayne the owner of the cottage where Martin rented a room would see Martin and jump into the shower.  It has happened frequently, Martin goes out for a run, who’s in the shower when he gets back?  Wayne had an hour to jump in, and yesterday, he had two full hours and even longer since Martin walked down to the beach.
The front door was open, music playing on his stereo and the bathroom door was closed, he called it.  Wayne was in there, either taking a shit of taking a shower.  Martin went into his room and heard the shower and gave him the finger. 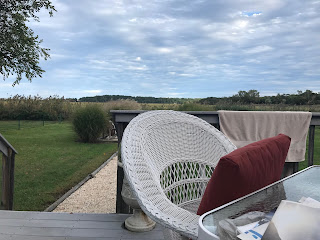