Don't Let the sound of your own wheels drive you CRAZY.

This is the last entry for the year and it’s time to look back at what I wrote.  I wrote more  blog entries this year, thank you for reading some.

For this entry, I wanted to capture my travels which for the most part were for work.  I am not complaining, but this year I spent more than 30 nights, maybe closer to 40 nights in a hotel room.  It’s the most for a single year.  Most of the trips were to Pennsylvania or Massachusetts for meetings, but I was out in California for a trade show and flew out to Illinois for another trade show.  There was a meeting in West Virginia.  I thought of John Denver as I drove across the barren West Virginia landscape; take me home, West Virginia.  Not for me, but I intend to get back there in 2015.  For vacation we went to Disney.  Wait a second; I’m sure these details bore you.  I am sorry.  The odd thing is feeling the need to travel. When I don’t travel at least every other week, I feel anxious. I need to get out on the road and get in front of clients.  For some of you it may be hard to imagine, leaving the comforts of home and of course leaving the company of my wife and children.  Yes, I miss them.  There are nights in an empty hotel room when I have a cold dinner which I ate hours before only to watch it wilt and become stale.  I have emails to work on.  The TV is playing ESPN or something from the History channel, but I try to get in some reading and writing while I have the time.  There is the need to prepare for the meetings as well. The room is still quiet without the sounds of my family.  The next morning I may run a couple of miles on the treadmill, buy a veggie breakfast and head back to my room.  And before you know it I am in the parking lot for my first appointment and debating if I should wait or go in fifteen minutes before the scheduled time.   After my meetings, I may head back to my room and answer the emails and call back those who left messages.  But, if I am lucky I can get back on the road and head home.  I discovered the secret passage called the Ocean Parkway which runs East to West and is located at the most Southern region on Long Island.  There are times when I can see over the sand dunes at Jones Beach and watch for a second or two as the mighty waves from the Atlantic crest and crash into the shore.  These are some the sites I like to see.  Well, the ocean and an open road as the radio is playing a song which was created for driving.  Eagles, Take it Easy…

Happy New Year’s and here is a salute to 2015 to the profound potential a New Year has in store for all of us. 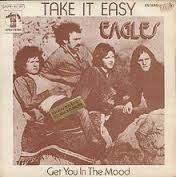 Daring to be BOLD The Scofflaws played at 89 North!

This year I saw the Scofflaws four times. Their performance at 89 North on Friday 12/19 was one of the best.   It was a cold night which was a stark contrast to when I saw them at the Great South Bay Music Festival last July.  I walked into 89.  The cold entry leads to a staircase which was barren.  The bar was empty and I paid a $5.00 cover to the doorman who asked, who are you here to see?  The Scofflaws.  Sammy was at the bar with a gin and tonic and was talking to the bartender.  She said she used to tend the bar in Port Jefferson when The Scofflaws regularly played on Main Street years before.   There was a venue above Starbucks and I’m not sure if this is what is called The Arden.   I offered to buy Sammy a drink, but he was good.  Bought a pint of Blue Point’s Hoptical Illusion and took a sip.  It was very refreshing and when the bartender said, the alcohol content is higher than normal, well, I liked it even more.

This was my first time at 89 North and I have to say I was impressed with the layout.  There was a kitchen in which fresh pizza was being prepared for the soon to be intoxicated crowd.  There was a large bar with a varied selection of taps as well as spirits.  I walked in and was impressed with the expansive risen stage.  There was a large area for dancing.  Tables with chairs were in neat rows and there was a balcony and another bar in the back as well as the sound board.  If you wanted to watch The Islanders or basketball, there were assorted TV’s on.  So, in comparison to some other Long Island venues, 89 North is a very professional establishment.  Don’t let the barren lobby fool you.

Eventually, Erik showed up since he worked till 7 PM.  His band is playing at 89 North on January 24th, The American Pink Floyd Experience.  We had a pint and took a seat at a round bar table.  The subject of cover bands playing gigs is something I need to cover in another blog entry.  It amazes me there is such a robust market for these bands who tour and are able to pull in crowds at larger venues.  Just recently, I saw another Pink Floyd cover band on TV performing at Red Rocks in Colorado.  There is an array of Led Zeppelin cover bands.   Anyway, if you like cover bands; 89 North has a variety playing each weekend.  I can’t say I’d go to one of these gigs unless I knew the musicians…but if there was a Clash cover band…you might pull me in.  You might.

The Scofflaws were the first of three bands to play that night.  Also on the bill were Noah’s Arc and Slavery by Consent.

When The Scofflaws took the stage the crowd from the bar came in and started to bop to
the music.  Missing was Jared on trombone which was similar to the last time I saw the band in Smithtown.   It means the sound is less full, but the band at 89 was tight.  Listen; there can’t be a mediocre Scofflaws performance as long as Godfather of the Rude Boys, Sammy Brooks is on the stage.  There were people grooving in front of the stage as Sammy praised the crowd and sent his love.   Just look at the pictures.  He is the man.  I’m working on getting an interview with Sammy for this blog.  He said he’s interested; it’s just getting the time to get together with the man…the man…

Let’s hope we all get to see The Scofflaws in 2015. From what I understand there next gig is in March.  It’s a shame they are not on The Slackers line-up at 89 North on January 30th…just saying…any Ska gig on Long Island should include The Scofflaws! 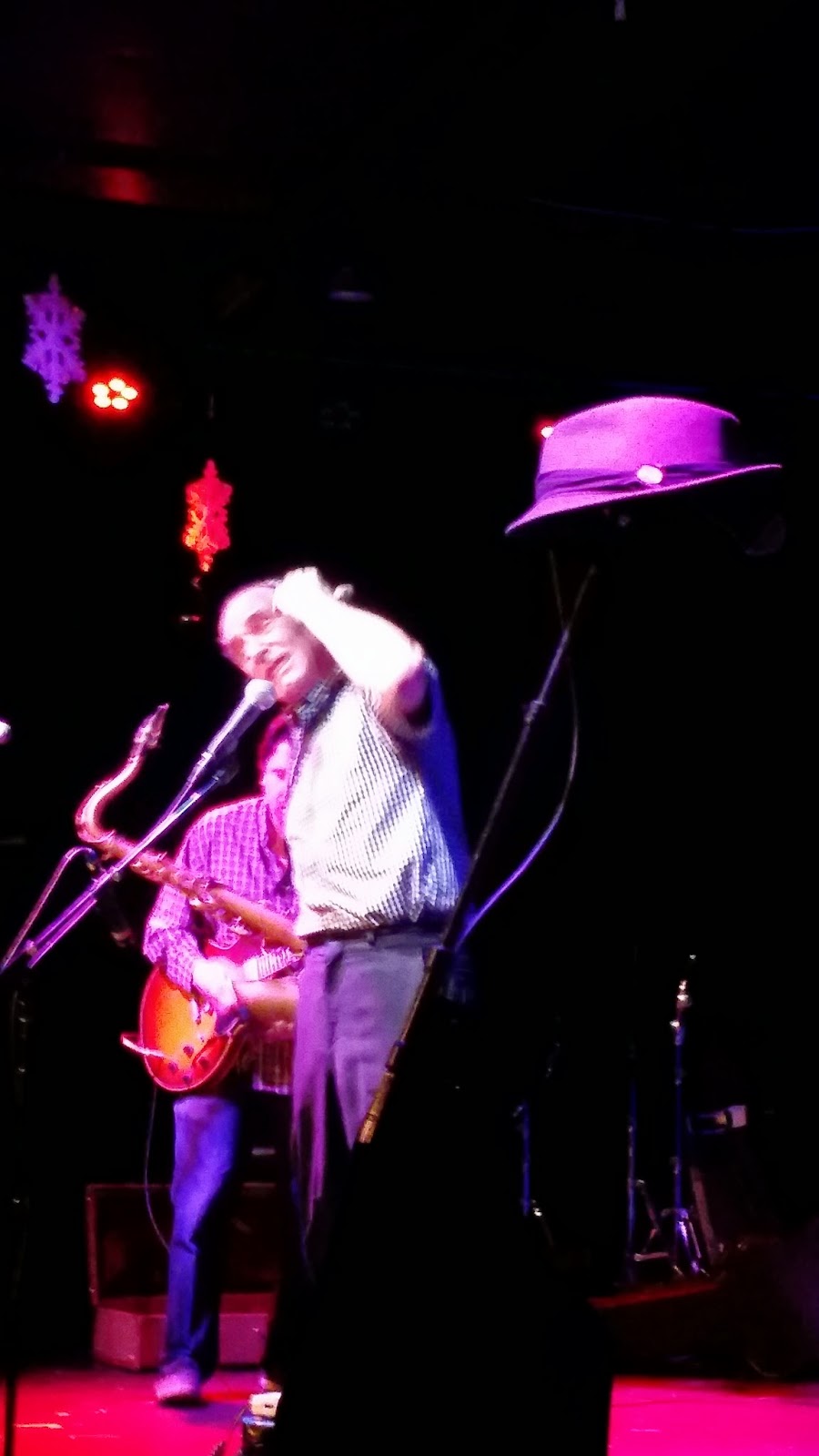 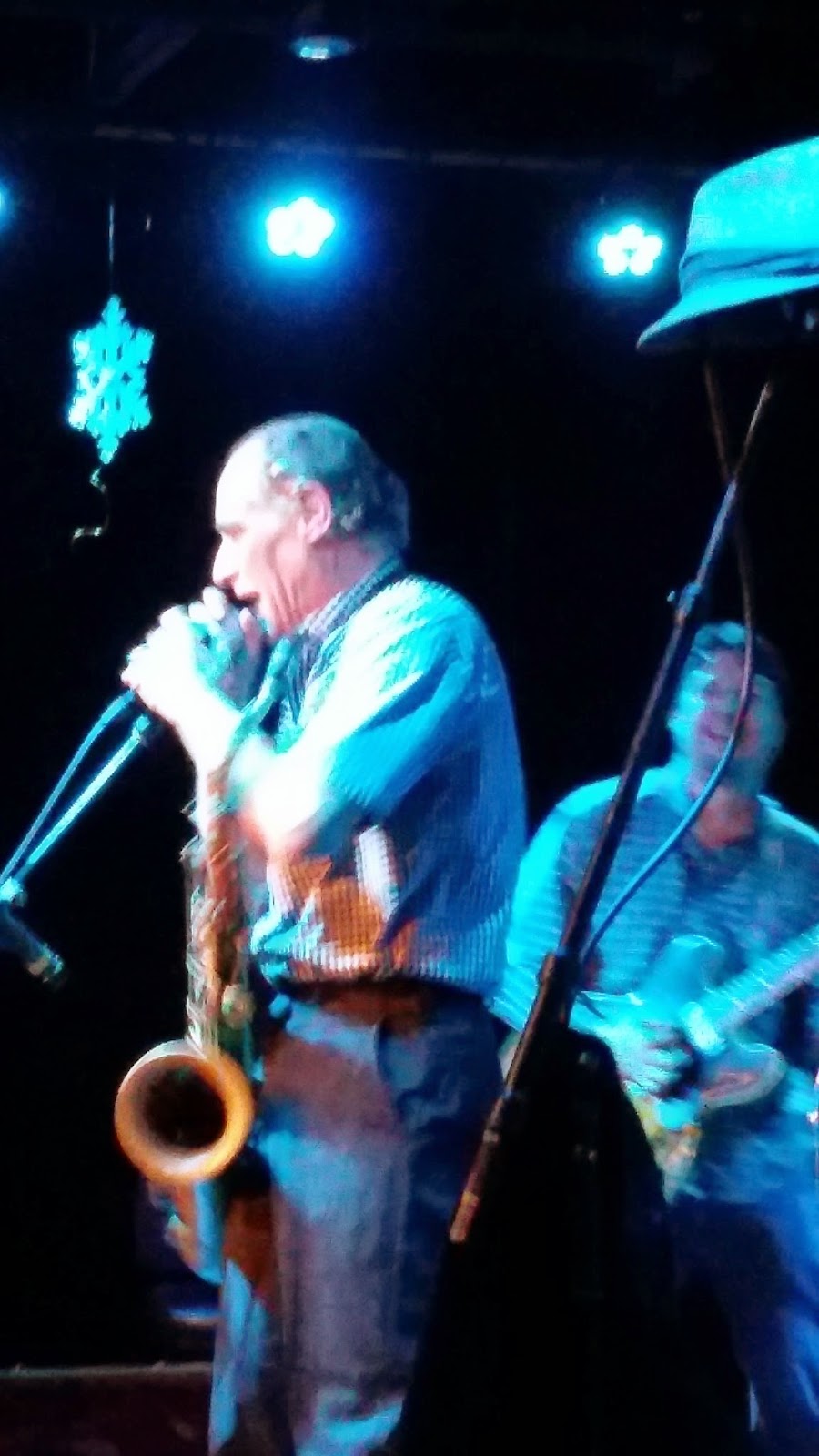 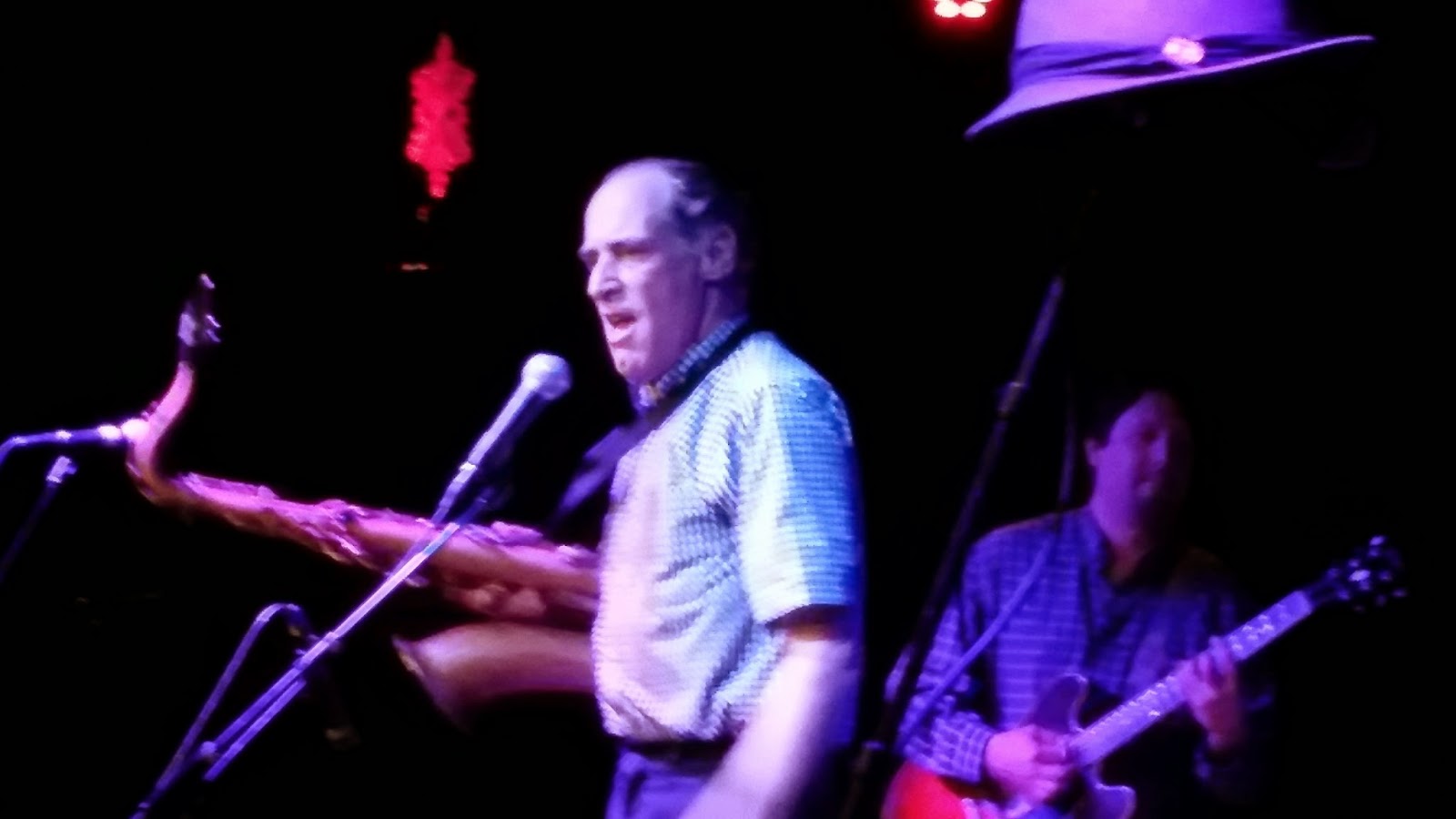 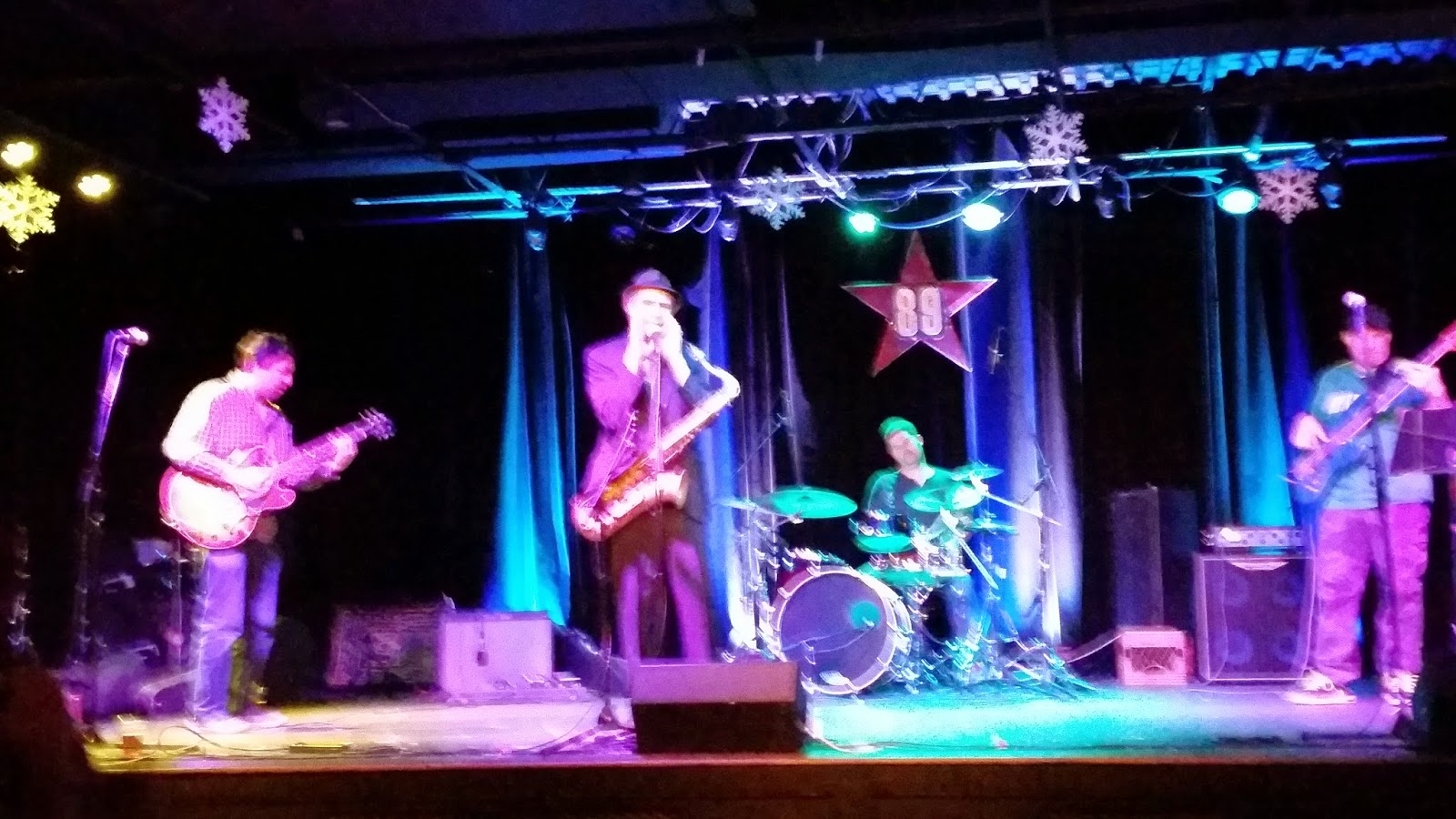 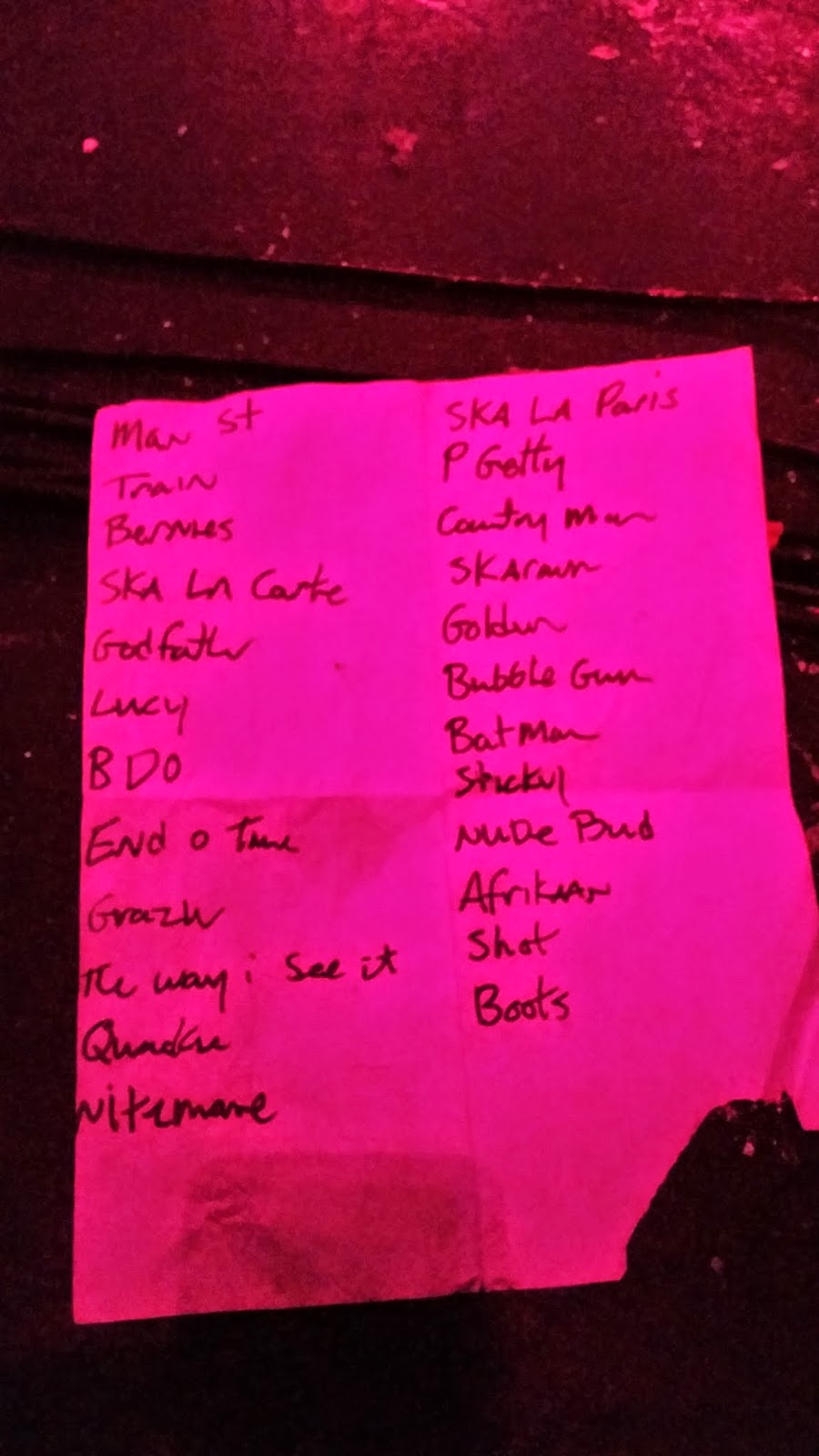 I’m on a search mission for a good used book store on Long Island.  For now I have settled on Book Revue in Huntington although I can get lost in the massive space.  It’s not exactly what I am looking for.  Although their staff is very knowledgeable and courteous so I am not discontinuing my patronage to this fine establishment.  There is Canio’s Books in Sag Harbor and I hope to get out there this season.  This place has small bells on the front door; the musky, yellowed paper scent, the faint classical music or jazz playing over the radio from a couple of suspended speakers from a tin ceiling.  I find peace in these stores and want to shovel cash through their registers to keep their lights on and the scent of the books wafting through the narrow aisles.  Sadly, all of us have experienced the closing of some these hollowed landmarks.  For those of you who recall Oscar’s Bookstore in Huntington.  It was on New York Avenue. I will share some memories.  Oscar’s is where Kerouac shopped and where I worked for a summer.  I had the honor of working there before Oscar retired to Florida.  Of course I asked him about Jack and he responded with a casual reference.  I could tell it was something he often repeated to anyone who asked.

That summer, I was renting a room in a boarding house owned by a Stony Brook philosophy professor. I was attempting to live a bohemian life.  My room had a tall ceiling.  The windows faced West Neck Road.  It’s the room where I discovered and transformed in some respects.  I discovered tranquility and the art of being alone.  Being alone is a difficult task.  For a young man or woman it’s an avoided evil.  They tend to search for diversion and common distractions which can lead to some intoxicated and drug induced episodes.  I learned.  I learned from my transgressions and moved on.  If we dare and are bold enough - we face the fear of isolation and look within inside ourselves and accept the person we sometimes avoided at all costs.  It takes work.

So, let me share what sort of poet I was while I worked at Oscar’s.  For any writer, artist or reflective soul it’s important to push the boundaries.  I pushed them as often as possible.   Mr. Piddles, the manager at the book store was a gentle easy going family man with a good temperament.   One Saturday morning I slept in.  I accepted the fact I would most likely be fired for not going into work and defiantly pulled up the covers and dealt with my decision and aching hangover.  Suddenly, there was a pounding at the front door at the boarding house.  It was uncommon to hear such commotion.  I heard the door squeak open and then I heard, “Where is he?”  Who?  “Michael.  He is supposed to be at work!”  Mr. Piddles?  I thought.  Mr. Piddles was a raving lunatic.  To march down to the boarding house - which was a half mile away from the store – was the sign of a disturbed mind.  “Michael?!   I know you are in here!”  Who let this man inside the house?  Did I dare show my face?  No.  I waited for Mr. Piddles to storm out and pulled open the door to my room and peered into the empty hallway.  It was safe.  Kevin who lived downstairs liked to sit in the front porch and play his guitar, singing loudly as he could to the passing cars.  He liked the attention of his passing fans.  He was the one who let in Piddles.  He was surprised to see me.  He said, “Hey, if I knew who he was…I wouldn’t have let him in.  I would have covered you.”  I nodded.  He asked, “So?  You going in?”  I looked at Kevin who was shirtless and pale and nodded.  His pink nipples were gross and too long for a man.  He had a large shamrock on his arm.  It was an off centered, homemade tat on his right arm. “He’s going to fire you.”  So what, I said and went back to my room and got dressed.  I stumbled up to the book store and saw Piddles.  His face was red.  He exclaimed, “Well, look who it is.  You know I came down to your house to bring you in here.”  I nodded.  “Lucky for both of us you were not home.”  What? Wait, he didn’t know?  Piddles assumes,I was not home.  I did not hear anything and he smiled.  “Well? Get to work!”  Maybe he did not want to know the truth and gave me a break.  It was one of many breaks. 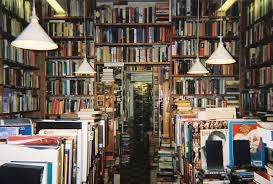