Homeless in DC and lessons for my children 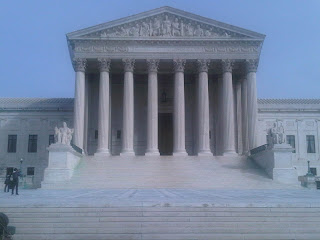 After visiting the Library of Congress we walked a few blocks down to the News museum. There were homeless sleeping on the sidewalks in Washington DC. Our national’s capital may not be equipped to care for the homeless? We live in the world’s richest country, we are the most productive, land of freedom and opportunity, and yet bundled up in blankets on a bench is a life. I remember twenty five years ago marching for student’s rights for minorities, and not allowed to sleep on Federal property, the metro police were out that night in force with a parade of motorcycles beaming their headlights into the temporary tent we set up. The officers would walk through and tell us not to lie down and gave directions to a homeless shelter. A few of us gave in. I wanted to experience a night in a shelter. We were given a blanket and told to watch our shoes and wallets, and given a spot on the floor in the church’s gymnasium. When I fell asleep there were a few of us on the floor. When I woke up, the place was packed. Many of the homeless choose to sleep on the streets. I see the bundles down on JFK Blvd in Philadelphia when I go out for a morning run, and I see them beg for money when I’m out for appointments. Before we took our train back to the hotel, a man was standing at the entrance for the metro station with a plastic cup. His face looked haggard and I put in a few coins in the cup, thinking of Jesus and showing my children that we can help in our own way. What surprised me last night was when I drove over to a friend’s house to pick up our dog, and Bella used the term hobo. It’s such an old expression, but we talked about being homeless and I pointed out, it’s not just men on the streets you see, but women and children your age. I hope they both don’t use the term hobo again since its derogatory, which was the word we learned last night.
at February 28, 2011 No comments:

I’m sitting in the darkened hotel room at the Greenbelt Marriott. The staff is very courteous and I’d recommend this place to anyone who is considering a trip to DC. It’s not in city, in fact it’s in Maryland, but we’re a quarter mile away from the Metro station. To get into the city, takes approx 45 minutes.
We left Port Jeff later than expected, since I had some work to do. On the way down we stopped at the Cracker Barrel off exit 5 on the New Jersey Turnpike. It was early enough so I ordered a stack of peach pancakes, side of turkey sausage and coffee and orange juice. The food hit the spot and after spending some money on the little bums we headed back on the road. From Cracker Barrel it took about 2.5 hours. From Ronkonkoma, it took roughly two hours. Traffic was easy all the way since we left after the morning commute.
So we checked in and relaxed, the kids hit the pool and Ali and I prepared for our night at the Kennedy Center to see Bill T Jones Dance performance of Fondly we Hope, Fervently we pray. Seeing it in DC was appropriate since the dance is based on the life of Lincoln and his family, with much focus on Mary. I bought the tickets the day they went on sale back in December. We took the Metro and a shuttle from the Foggy Bottom station to us to the Kennedy Center. I expected the performance to blow me away, and I was not let down. The visuals, the music and the incredible artistry of the dancers were beautiful. I’m happy we made it, but when we got back to the hotel, my mother-in-law told us how sick Amanda became. Throwing up…must’ve been something she ate. She suffered a similar bout when they came back from Cape Cod for her sweet 16 trip.
Yesterday, Mo cheeks and Grammy stayed back as well as Papa, and the rest made our way to DC to see get a tour of the White House. It’s been years since I was in the building, the last time must have been when Carter was in office. I expected small groups were allowed access, but there was a line. School groups, church groups, families, it was a fast line, but I missed the idea this was a rare event for a few special folks. After getting through security, twice when they checked our ID – we were in. The secret service guard inside explained it’s a self guided tour, the faster you go, the more you miss, so take your time. Also, ask questions, they are secret service, but they must learn the facts of the White House. Last night there was a Mo Town show, Stevie Wonder performed, as well as others, the show will be on PBS next month. Passing through the halls of the White House, the antique, pristine furniture and paintings depicting the presidents and natural landscapes was humbling. And I’d remind myself, this is where he holds press conferences, this is where they lay in state if they pass while in office, where Lincoln and Kennedy were. What about McKinley? The heavy window curtains, the wall paper in the Yellow room and Green rooms, and all the time, I’d look outside since all of these years we have been looking from the outside in. I saw a few tourists looking at the house, and studied the magnolia tree, heavy limbs supported by wires. There were no photographs allowed inside, so we snapped away like everyone else once we got outside.
Eventually Joe met us. We ate lunch at the spy museum café. Avoid the café, the food was horrible! I went across to the National Portrait Gallery, and art museum, they took in the spy museum. I love this museum and could spend hours in there. There’s a section on folk art, which contains works from Rev Finster and so many others.
Today we’re off to DC again. I don’t know where, but I hope Amanda and Grammy join us. If anyone is feeling ill, I suggested to Ali that we head back home. I can’t see the point
at February 26, 2011 No comments:

Yesterday I woke up in Malvern PA - it was a busy day, my first appointment was at 8:30, and another at 10:00, and then a lunch and learns at 12:00; which took around three hours. After dropping off the rental and filling up the car, I made it home after 7:30. Made a salad for dinner and had a yogurt.
I’ve been reading Half The Sky and will participate in a book club at church. After watching a documentary on Frontline on sex slaves and reading this book my mind has been transformed. The insidious nature of prostitution and our misogynic attitude has destroyed the welfare of societies. Predators have waged a wining war on poor women, and the most poor are the most vulnerable. With false promises of a better life through jobs, they are stolen and sold into sex trafficking. Once there, they are physically and mentally tortured and drugged to comply with any demands. Just this week, our western world was shocked by the gang rape by a group of men in Egypt on a CBS reporter. In comparison to the stories in Half The Sky, all of us should get doses of reality checks. It’s not uncommon for young girls to be brutally raped or disfigured. The missing element in these societies had been the lack of education. Universal education should be standard, not only for women, but for men as well. If a woman is schooled, there are greater benefits for their society. They have fewer children; they become leaders in their villages, entrepreneurs, nurses and doctors. There is hope. We need to be conscientious. Instead of writing a check to help a cause, roll up your sleeves and assist. As I’m writing this, I have an intention to go back to Guatemala, but in my own back yard, there are young girls who are growing up in poverty and are becoming victims.

Listening to NPR this morning, there is a story on Afghan women and abuse they're encountering, shelters are fronts to prostitution? Many women are forced into marrying their rapist out of shame.
at February 21, 2011 No comments:

January 31: Book Review
Walter Mosley’s Fearless Jones was a decent book to read on the commute. Decent, but not a grabber and a little confusing to keep up with all of the characters. This book introduced us to a new character, Paris Milton a used book store owner who suddenly gets tied up in international swindle. Who else can protect him, the one and only Fearless Jones who was imprisoned and forgotten? It’s more than that, but I think he was stretching the plot too much and in the end sewed it back as best he could. Many characters were killed and all somehow were involved in this mysterious monetary bond that had immeasurable value. He threw in a corrupt cop and preacher, and of course the holocaust for good measure, but decided to leave the Nazi’s out of this story. If you want to learn how to create a character, Mosley is a great guide. He captured the early sixties as best he could, incorporating racism, segregation and deep rooted beliefs held by some African Americans. There are times in this book when you feel the pulse of the writer’s creativity and other times when you’d scratch your head and ask where the fuck is this going? Who is that, how do they tie in? Maybe if I read it on a weekend, the book would appeal to me more.

February 2:
Black Coffee Blues Do I Come Here Often? Book II
Henry Rollins hits it with this book. This is my second Rollins book, which contains articles and interviews he wrote and conducted for various magazines. You’d learn more about Rollins as he describes his respect for David Lee Roth and how Nugent was pissed off when the audience at his concert was chanting for the opening band, Van Halen. Johnny Lee Hooker is interviewed as well and we’re warned that the man did not speak. But he opens up for Henry, sharing some stories, his affinity for Van Morrison, that in itself is an incredible endorsement. I’m going to research some of the other musicians who he said were overlooked by mainstream media. Other pieces describe the first Lollapalooza tour, speaking word engagements. He writes about visiting a dying teenager in Australia, bleeding lips and with sores in his mouth who was shocked when Henry came to visit him. Included is a visit to his old neighborhood, and he writes honestly about his parents and his feelings for them. Alright, these emotions, like love is what was missing from Broken Summers, this guy can write and open it up. I actually laughed out loud a few times, describing his disdain for passengers on a small aircraft in Spain, and teenagers on another flight. The women who constantly throw themselves and one in particular who he tries to explain she doesn’t have to do those things, later he sees her coming out of tour bus wiping her mouth, after being with many and looking away embarrassed.
at February 03, 2011 No comments: