Driving to DC to see Rollins at the Smithsonian

For some reason I can’t sleep so I write.  I drove down here yesterday to see Henry Rollins at the Smithsonian.  I respect him for his work ethic as well as social justice stands.   I wrote a few blog entries about Rollins, from reviewing some of his books as well as his spoken word performances.  This year, he has made infrequent public appearances.  It seemed a Rollins show was an annual event, but he’s busy working on his show for National Geographic as well as he described, “Hollywood stuff.”   Last night event was titled, Henry Rollins on the DC Punk Scene.  It was the closest Rollins event which I could make, so I bought my ticket weeks ago and knowing the event would be a sellout.  Who else would drive more than five hours from Long island and take a subway into a humid October night?

I used my Marriott points and rented a car since my beast has more than 160,000 and I was not risking the drive.  Packed my things, brought some books and CD covers as well as an album by the evens, since I hoped Ian Macaye would be there.  After roughly five hours of easy traffic, passing autumn vibrant in orange and yellows and weary of the highway patrols, I checked into the hotel in Rockville Maryland, dropped off my bags and checked some emails before driving to the Metro station in Shady Grove.   The Metro ride was closer to 45 minutes.  I was not the tourist this time in DC.  I was on a mission.  I barely noticed the Washington Monument when I stepped outside onto the mall, oh there it is, and on the opposite side, the capitol building, the dome is under scaffolds.  I made my way to the museum of natural history.

DC is Rollin’s hometown.  In his books he writes about the city like James Joyce created - referring to his mythic Dublin.

The auditorium in the National History seats more than five hundred.   The ceiling is tiled and the acoustics were perfect.  I had an aisle seat and sat four rows back.  Chris Richards was the interviewee and handled himself very well.  There was a familiarity between the Rollins and himself, not only on the subject but more for Rollins support when Richards played in his punk band.   Rollins started out describing his friendship with Macaye, who he still considers his best friend since he was twelve.  They shared and continue to share music,  Macaye lived, “about a four minute bike ride from me.” They swapped Hendrix albums and eventually made a pact; we will either be comedians or musicians.  Music motivated them.  Punk transformed them.  Rollins said they continue to share music as well as artistic influences.  If you don’t know Ian Macaye, he is famous in the punk movement for bands, Minor Threat, Teen Idols, Fugazi.  He is known for creating the movement - straight edge - as well as Dischord records. Not in that order.  Rollins said straight edge has taken off and become more extreme which was never the intention.  If there was one thing missing on the stage, it was Ian Macaye.  I would have enjoyed hearing them swap stories and as Rollins said a few times, Ian was in the audience.  But seeing Rollins take charge and not giving Chris Richards much of an opportunity to carry out the interview…makes me reconsider - I am not sure what we would have seen with Ian up there.  I would assume it would be a moment when Rollins was on a stage and spent a great deal just… listening.

The interview became less of a DC punk movement to a Rollins interview.  There was an emphasis Bad Brains who gained fame for opening for The Dammed.  Seeing HR and getting closer to the stage as others backed up, frightened by the singer HR.  Seeing The Cramps in a very small venue, The Ramones played in a wine and cheese place, he got so close to the stage some sweat from Dee Dee fell on him.  But there was little about the influence of DC punk other than the Bad Brains.  The Cramps and The Ramones hailed from New York.  Early in the discussion Black Flag was raised.  Ian was interested in SST Records and called them up to learn more about the independent record business.  The fact he called impressed Rollins.  “Typical for him.  You did what?”  I called SST and spoke to Greg.”  On a side note, this is typical DIY.  While Black Flag toured, they would stay at Macaye’s parent’s house and this is where Rollins got to know the band.  Their bassist Chuck Dukowski influenced Rollins, suggesting he listen to The Stooges and MC5 and would call Rollins from time to time.

It was in New York that Rollins took the microphone and sang his first Black Flag song at an after show party and right before he made the five hour drive back to DC to start his shift at Haagen Daz where he managed the store.   Some months later, Greg Ginn called him and said they are holding auditions in New York and would like him to try out for the band.
Last Sunday, I took a punk tour of the Lower East Side.  It was led by John Joseph the singer for the hardcore band, Cro-Mags.  Part of the tour was seeing where Rollins auditioned for Black Flag.  I have to admit it was one of the highlights of the tour.  Last night, after the interview I had the opportunity to meet Rollins.  I told him about the tour and how the building was one of the stops.  “It’s really part of the tour?”  It is.

Henry Rollins and Ian Mackay are currently archiving punk posters, records, as well as journals.  Eventually he would like to create a data base for people to see and learn more about punk.  This leads to one of the last questions which Chris Richards asked, regarding the recent Black Flag formations and their respective tours.  It was Greg who called Henry (although he denies it, per Rollins) to say he was leaving the band.  Well, in that case, there is no more Black Flag.  Instead of being somber, that day he wrote two songs which eventually became his first album and which eventually became the Rollins Band.  He described how he endured the break up and worked hard, starting a publishing company, touring with his band and giving spoken word tours to make money to pay his band, sending them money orders from the road – while his ex- band mates did little to further their career or to make money.  About the new Black Flag renditions, that time has passed.  They came to my office (FLAG) to ask me if I wanted to join.  No.  Not interested.  They are too old and getting close to sixty.  It pisses me off since Black Flag means so much to me.  It was like a war we created when we went on tour.  I was beaten up, stiches to my lip, eye, broken ribs, cut and bitten…both renditions were touring, FLAG contained most of the original members, but Greg Ginn also toured as Black Flag in 2012 and sued FLAG as well as Henry Rollins.  “I guess he sued me for good measure? It was like The Platters, well our version has the original session player from the first album which makes us more authentic.  They play these songs and are huffing through them.  It was a joke.”


It was well worth the drive and the opportunity to hear the man in person in his hometown.  And yes, I met Ian as well…the man is a gentleman and very gracious.  What was curious was to hear and learn the differences in the cities, especially compared to New York, punk fans in DC were more respectful and polite.  I don't think Rollins cussed once during the interview which was a contrast to getting a tour of New York by the street survivor John Joseph... 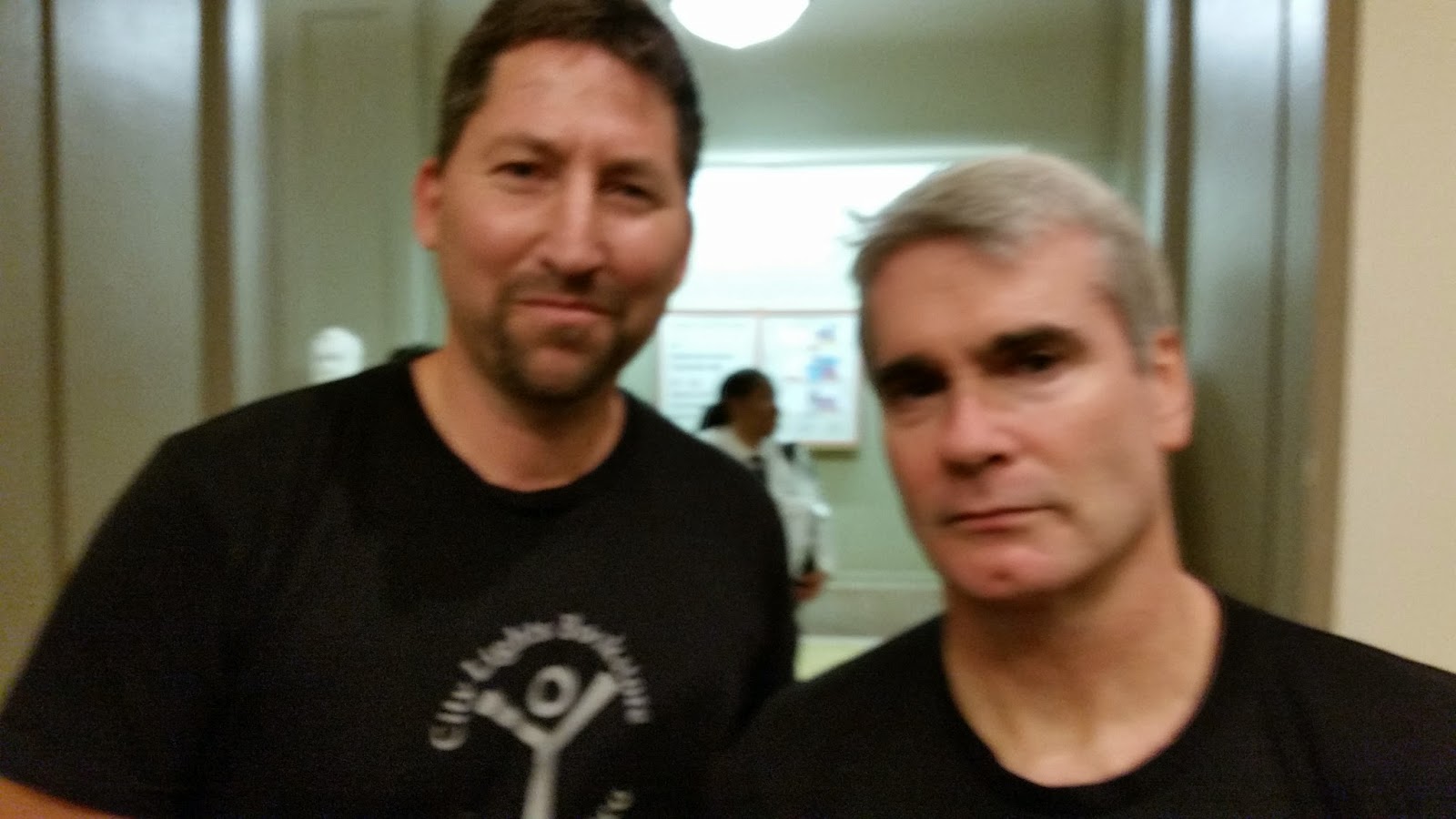 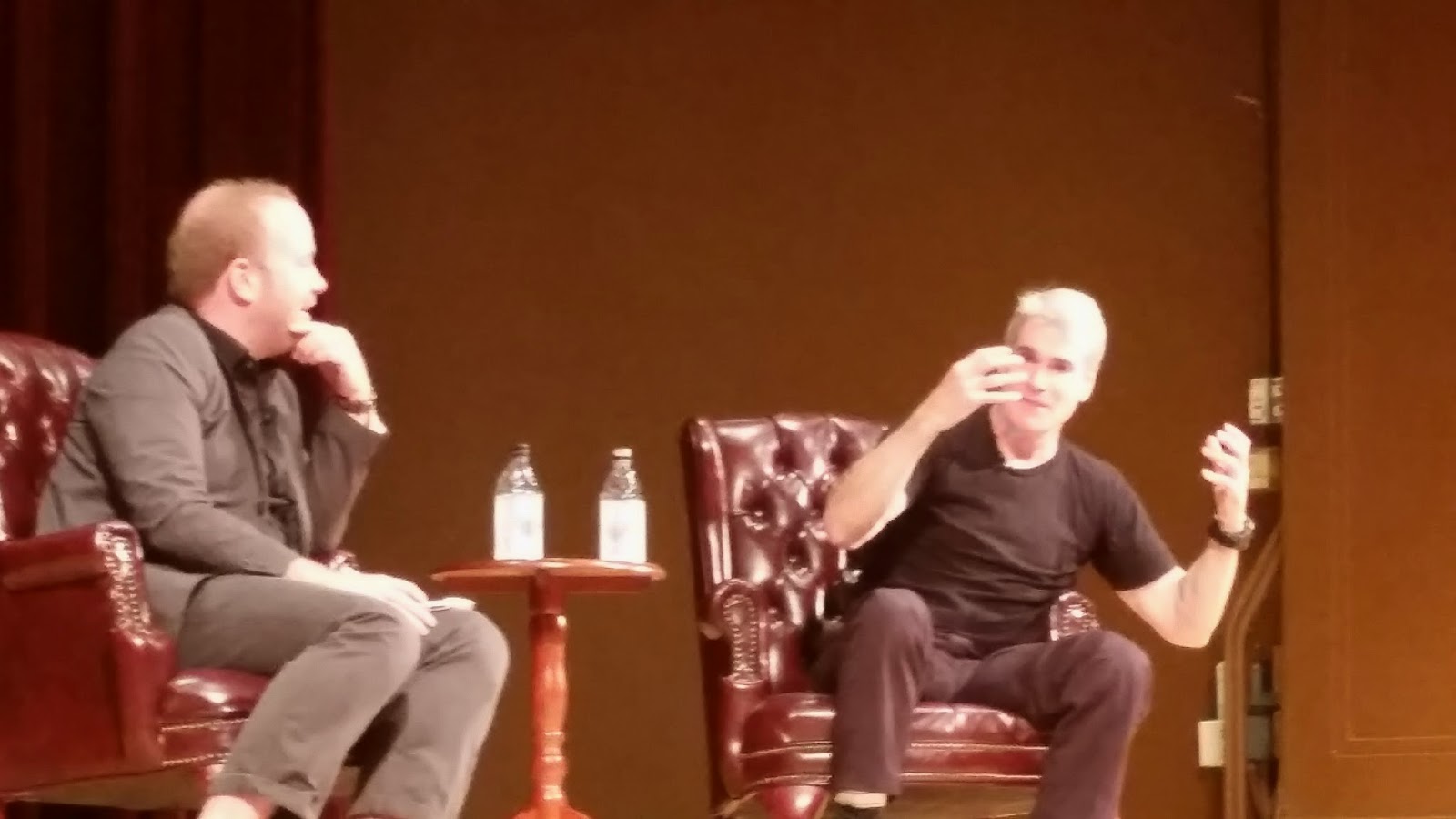 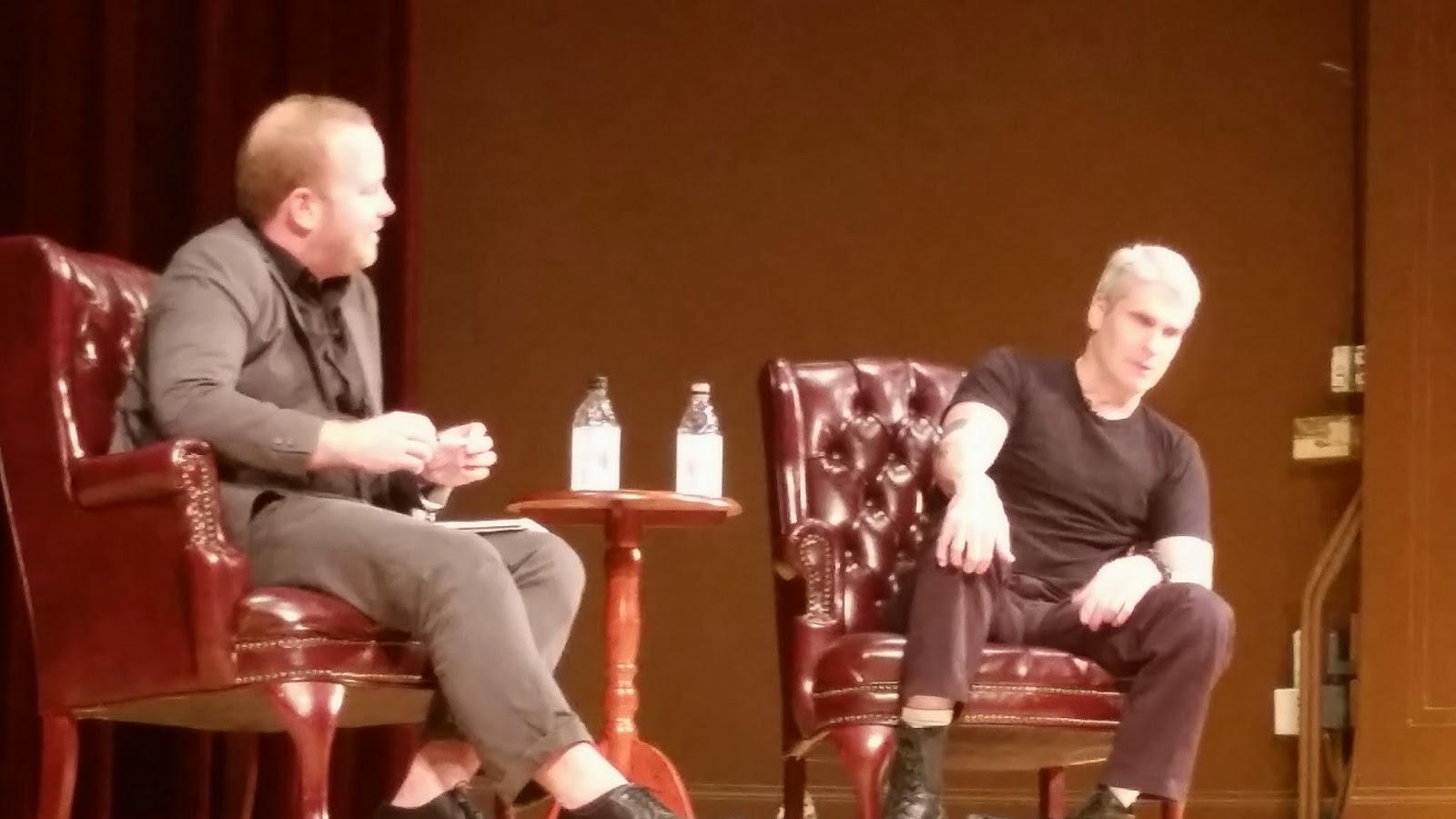 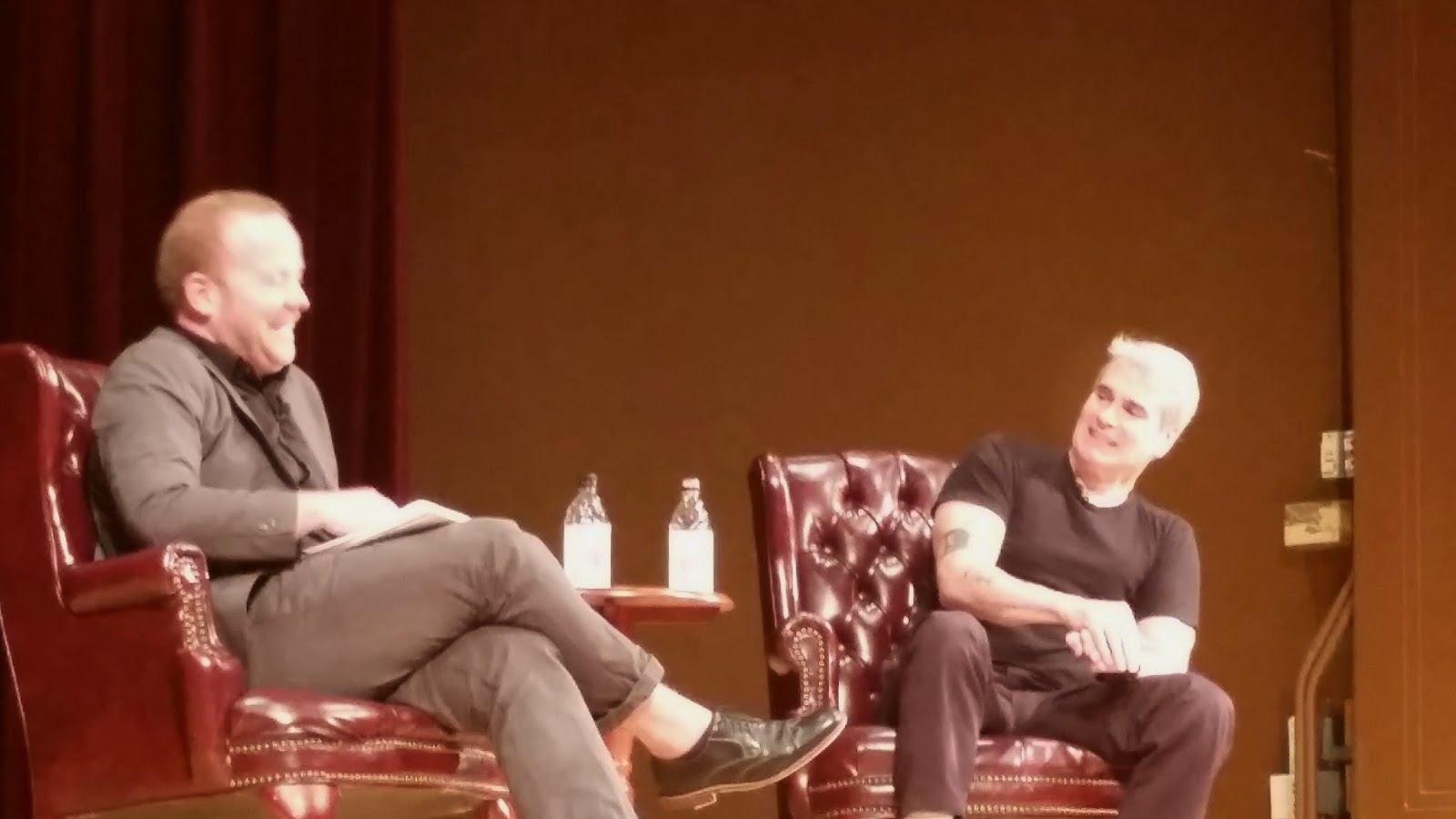