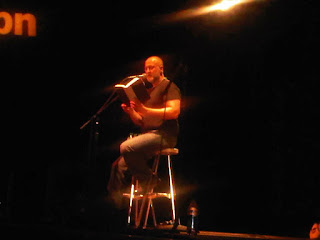 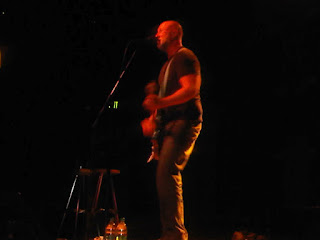 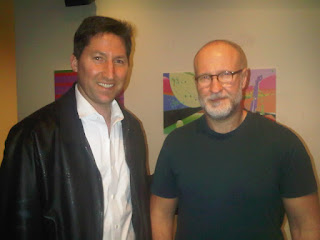 Can I get an amen when it comes to driving in Route 76 heading into Philadelphia from Plymouth Meeting, an amen to say we hear you loud and clear brother, the road is like a parking lot. Add some snow and some nonsense like a fender bender and two men pumping their fists towards each other chins in mock violence oh amen. I told my real brother (not you sister Lyn) we’re going to be late. But the road cleared as we approached the zoo and other exits bringing us closer to World Café. What exit? I don’t know. But we found WXPN and parked the black beast and jogged to the back doors to event and got in. I climbed up the steps since I knew I had mere minutes. Mould is punctual a no nonsense mother fucker who hit the stage exactly at 7:30 and we were there in the front row. This was a solo performance and reading from his autobiography, See A Little Light. But first let me describe the empty seats, the older faces, who are they? Face it they are us. Where are the rest of the punk mother fuckers? Decided to stay home? What the fuck? How was the show Michael? I can hear you. At first he was a little off, I was not sure what direction Mould wanted to take us on. Was there the “in depth- heart- opening- soul- exposing -onslaught” on the stage? No. So I felt he skimmed over the surface of the book, teasing the audience, the potential lethargic readers who could have purchased this book months ago. I read it and reviewed it here. So maybe this was the man, he skims over all of us and drips tidbits of information and honesty. But when he plugs in the guitar, tunes it and strums the opening chords, the truth resonate in the speakers. This is when the show really took off. The performance built up to an amazing pace…the audience was wrapped up in what Bob played. If Bob came out with a clear direction of his readings, the show would have been better. If Bob stopped acting like this was his living room or a classroom and was lecturing us on microbes in the Mississippi. It would have been much better. Let me finish with this, take my review for what it is. It’s a learning lesson on the life of Bob Mould who is gay and open and proud of it, but more it shares where the man lived like the time he lived on a farm in Minnesota. That was a boring part of his life and I’d suggest maybe it was not a good idea to start the show with the blazing epic. Thank you for the picture and for signing my book.
at February 08, 2012 No comments: