Back on the train on a Tuesday morning and I’m feeling beat. I went for a run this morning which transitioned into a morning walk. I have to get into my head to eat lightly the night before. I feel the mass of digested food pushing down inside my kidneys. With the humidity the only break from the run is a good walk, but this morning there were so many breaks…so lesson, eat less the night before or go the bathroom before the run, I would be lighter and able to maintain some semblance of speed.
Yesterday was Memorial Day. Instead of sleeping in we woke up early in the morning. It was raining when we left a house, a passing storm the weather experts predicted and were correct. Joe my father-in-law drove us, who included my son Joe and daughters Emma, and Isabella into Staten Island to see the USS New York and other Navy ships. It used to be a tradition to ride into Staten Island where as Joe my father-in-law explained there are smaller crowds compared to Manhattan. In fact one year, we went in with my brother-in-law Phil to tour the frigate he used to work in, the Klakring. That was a rarity, and Phil had the opportunity to bring his son, Joseph on-board.
This year was different since the New York which holds 7 tons of metal from the World Trade Towers in its hull drew a crowd. It’s the only Navy ship I have a picture of in my office.
We arrived around 10. Already the parking outside the gates was packed. From what we read it would be limited to 2,000 visitors on the New York. By the time we arrived the crowd must have approached 500. At first we toured a Coast Guard vessel, which was interesting, we saw how they manage our buoys and learned more about their responsibilities, protecting our shores. The men and women on-board were very pleasant, and answered the kid’s questions.
We waited outside the New York for about twenty minutes, and finally we boarded the large vessel. Men and women saluted the officer on deck. I was amazed how large the ship was and impressed with our military capabilities. The men and women all of them seemed passionate and took their jobs very seriously.
The oldest serviceman we met was thirty, most of these men and women are in their early twenties. The USS New York ship could hold more than 1,000 marines. There were demonstrations where the kids could hold actual guns and go inside some of the military vehicles. On the deck we were allowed to go inside the helicopters and the crews were very friendly. By the time we left the crowd, more than a thousand (maybe two thousand) were snaked around the dock. I hope everyone got a chance to board, if not I’d recommend - next year getting their earlier.
at May 31, 2011 No comments:

I wanted something quick to read so last night I began Henry Rollins Bang. Like I said I said it was a quick read, and most can finish it within a couple of hours. This morning I sat in the kitchen and wrapped it up. The last part of the book has what I would describe as haiku's. 1,000 little hits which were roughly a couple of lines, and perhaps five words…would I recommend it? There were a couple of strong hits, and the opening Knife Street was a slow violent ride. For Rollins fans, who might have read some of his earlier books, you can skip this. General themes, rape, murder, and misogynist angst.

On a side note, I saw a "documentary" on Black Flag's last tour. Generally it's a behind the scenes look at the minds of young men. No real insight. I couldn't tell if there was any animosity between the members of Black Flag. The most unsettling scene was when Joe Cole is laying in front of a headstone with Cole on it. He's actually talking about being dead, and gets up and runs after the camera like a zombie.
http://vimeo.com/23499919
at May 22, 2011 No comments:

Back in the grind 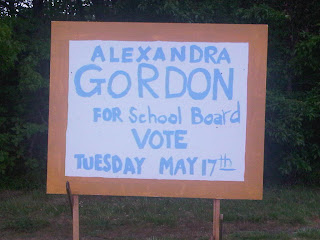 Back in the grind, last week was a full one in the office and this week appears the same. So what’s good about it? I get back to a certain routine, which is an oxymoron for a man with four children. But I’m on the train and this means I have time to write and read. I’m struggling with Celine, not so much for the writing which is poetic and forceful, I admire it, but its content is dark.
Tomorrow is Election Day for the district and many on Long Island. My wife is running for school board. If you live in the district, please consider her, she’s by far the best candidate and the most beautiful of the lot. Yesterday we hung a sign I painted. The posts are flimsy and I’m afraid the first good wind it encounters will knock it down. My project later is getting it back up. I can see us in the light rain with a better hammer. Last night I had a small axe, while trying to ram the post in the ground the axe slipped and nearly lodge itself into the cavity of my chest. She pulled up her hands to her face and I pictured my blood rushing out in a red wave showering the sign and the grass as I fell backwards. Joe and Bella were in the minivan…what happened to Dad? My scrape on my chest is the only proof how close it came.
Before we left the house, Bella and Joe told me that one of our cats got a bird. I ran after it with the bird in its mouth and jumped over the fence to our neighbor’s yard. I like my neighbor, Vito and I ended up chatting for about fifteen minutes as the kids chased after the cat. When I got back home, Bella was under the deck, with the half dead bird and brought it out. Joe lined his lizard cage which passed last week with paper towels and we dropped the baby Robin in. I told them it won’t last long, and Bella said in her matter of fact way, “It’s OK, it’s the circle of life.”
This reminds me, when I get home later I need to take down the light fixture in her room, she rolled up paper balls and threw one in the light fixture. When I asked her why, she said, “I was throwing up in the air like a football and it got stuck.”
“Were you trying to get it stuck?”
“No…”
“Bella, tell the truth.”
“OK, yes.”
“Always tell the truth, you won’t get in trouble.”
Time to go back to Celine…
at May 16, 2011 No comments: