Thoughts While Commuting To Work

Thoughts While Commuting To Work
By
Michael Robert Gordon

Is the media distorting the news? Are we getting all the facts on the stimulus? Maybe the media assumes we would be swayed by the panic? Another depression? I’m writing this while commuting on the train to work. Passing the same parks and streets, seeing the same faces in their same seats, we’re sort of like machines moving in our commuter’s syncopation. But we’re all here. Perhaps the economy in New York is not the same as the rest of the country, but we’re reminded we should all be afraid. Be afraid – very afraid for the wind is changing direction.
It’s tough for me to write about this. I have my job and for the most part speak to the same clients and new prospects each week. Our company is doing well. When I’m on the train I’ve been struggling with these deliberations. What good can come out of this current mess? Were we ignorant to think there was no such thing as a looming bursting of the housing market? We were warned. Were were silent when we allowed congress to send our money to the banks and other firms without at least the responsibility to enact fiscal policy or reform? I don’t work for a bank. What did we learn from our past? You can’t trust the government? Be the change.
There is another theme I’m hearing. Be grateful you have a job. Remember that meal you refused to eat? You crossed your arms in front of you and would not budge. Wasn’t it ma who said, be grateful you have food? I think while the bubble was expanding we lost the ability to be grateful, to put an effort into each day, and perhaps became complacent? It’s something my grandfather who worked three jobs to take care of his family would not dare to do. He had to feed eight children.
Let the market take care of itself. There will always be special interests that will police themselves. It’s the economy stupid! Be stable. Like children, we lost the strength and boldness to call out when we saw fraud and wasteful spending, questionable transactions. Be silent. It will all go away. As long as I get mine. Why, all of a sudden we’re exposing the likes of Maddoff, and other financial crooks? Think less government, fiscal responsibility, let the market regulate itself. Can we trust?
I feel sorry for those who lost their jobs and feel more for the children who don’t have a roof over their heads. Be grateful, is my daily mantra and each day while sitting in this seat, the same one near the back of the train and listening to the same voices tell their stories or complain, I will remain grateful for my job and do the best I can. This is a time when we are correcting the market, cleaning out the corruption. It has happened before and will happen again as long as we are ignorant to our insatiable greed.
at February 28, 2009 No comments: 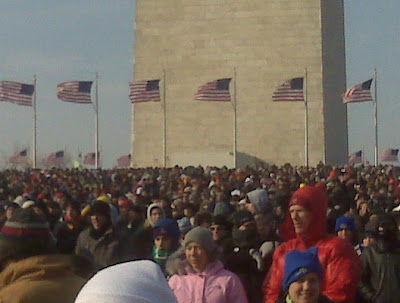 This past weekend I submitted stories to three publishers. By Sunday, I received a formal rejection and will put this story into the pending file. There are going to be some stories that I’m not confident about. Either the plot is different from what I’m used to, or there is an element that is lacking. The element that is lacking can range from character development. Thinking of Andre Dubos, what a writer to learn the craft of character development, and this is someone I need to go back to. Someone I’ve told myself I needed to go back to for a little over eight years, so after Audacity of Hope – I will read some Andre. But, what about the plot? In this example I’m considering POS, the Sci Fi story that is not really a Sci Fi story. Written by a writer who doesn’t know that much about science; so let me think about this…if I never swam before, can I really describe the sensation? Maybe that’s not a great comparison, since most of these writers never or will never live in the future. I was a little disappointed to read Asimov stopped writing novels during the fifties. Most of his million books were non-fiction. Did not know this. I would like to wrap up POS and submit the story and see the reaction I get.
Killer Commute is now in the hands of 5 Star. I should get a response in four to six weeks. It’s actually in God’s hands. Each time I read the book, I love it more. After reformatting it, the novel is approximately 280 pages. A lot different from the 340 or so I initially counted up. I’m thinking of ways to promote the book and can set up a table at train stations, and even have readings at certain stations. Why not? Imagine a reading at Penn? There are bands playing there. Imagine a reading during rush hour in the summer? Maybe give out free water? There’s a lot to do.
I’m writing this on the train. It’s warm in here and I’m at the Northport station. Just sat up in my seat and I can feel the sweat. The Salvation Army – Family Store. The one story business buildings. There was a mob killing in one of them – more than twenty years ago. Newsday had an excellent article that implied it was an inside job – dirty cops – that were arrested just a couple of years ago. And my old high school and we’re off towards Greenlawn.
at February 02, 2009 No comments: