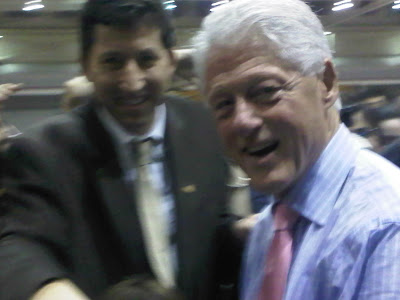 This year’s election the whole family has been supporting our congressman, Tim Bishop for re-election. The polls indicate it’s a tight race, but for my youngest daughter’s sake, I hope Tim wins. She will be very disappointed and I’m not sure how she’s going to take it. The whole family will be depressed, but we know the reality of politics. In our case, we’ve seen Gore win and lose. The other night Bella was watching TV, when a commercial for the opponent came on. “Lies! They’re all lies,” she said when the commercial mentioned Tim was for raising taxes, had bad hair and smelled horrible. Bella is seven. I think we’re raising a political monster. There is only black and white in her mind, either you’re with us or against us. Our oldest daughter Amanda has been diligently working on the campaign, and let me add here, all of us have put in some time – and for our hard work we had the opportunity to meet Bill Clinton before Wednesday’s rally at Stony Brook University. We were invited as part of a VIP group to have our picture taken with the president and Tim. The VIP group included state senator Brian Foley, the Brookhaven Dems director Jon Schneider and Suffolk Dems Rich and Mr. Jacobs, the State Dem chairman and others, but there was only about 20 in the lobby. In fact, we were the only family. In the Stony Brook gym, more than 2,000 flowed in to see the president and congressman Bishop and it was a great rally, a get out the vote to the students who are vital in this year’s election. I’m writing this on the train, since this morning I handed our literature to hundreds of fellow commuters before they boarded the train. Got out of bed around 4:30 and went for a run and heard a call at 5:30…and another at 5:45! 8 cops from the Suffolk PBA were waiting for me to hand our literature! And we did it together. It may be a tight race, but as Bella’s homemade sign states on the headquarters door, Tim Bishop will win!
at October 29, 2010 No comments:

While writing Killer Commute, REM’s album Accelerate was released. The fourth song on the album is titled Mr. Richards; the music jumped out at me. I wanted to use some of the mysterious lyrics, as well as the name Mr. Richards in the novel. You should know; I’ve been an REM fan since walking the five miles to buy a copy of their album Murmur, and saw them for the first time open for The Police at Shea Stadium. In order to use the lyrics I needed permission and I was directed to the right source through REM’s manager, Bertis who was very helpful.
http://www.youtube.com/watch?v=TnUyEYF8tv8&feature=fvw
This is how my mind worked: how can I use the lyrics in the murder mystery? From the hypochondriac veteran Detective’s point of view, “they know what’s going on.” From the insane killer’s perspective, “We’re the children of the choir.”
Please allow me some conjecture on the song; Mr. Richards is a full blown assault, a constant pulse pulling me into a wall of sound. It is very different from a typical REM song. Though who can pigeon hole them anymore? Almost thirty years ago critics would recall the Byrds when REM’s guitarist Peter Buck broke onto the scene with his sparse guitar playing. Compare the song HarborCoat from their 1984 release Reckoning, to their 2004 release Under the Sun, the song Leaving New York. I could speculate on the changes and write something didactic - the transformation is attributed to age and advanced technology, but both are bull shit responses. We evolve. Our tastes and our lives move on. Which brings me back to Mr. Richards and the reason for this entry; I’d love to learn the musical influences for the song. I recently listened to their album Green, and thought of Turn You Inside Out – it is the closest REM song to compare to Mr. Richards.
If you’re an REM fan and interested to read my novel Killer Commute, it’s available as an E Book and paperback on Champagne Books. I’m considering running a contest; the person who counts correctly the number of REM references that are in the book will win a signed REM item. Hint: John Stipe, Peter Buck and Mike Mills appear as well. Let me know if you’re interested, but you’d need to buy the book. Look for details of the contest early next year.
http://champagnebooks.com/shop/index.php?route=product/product&path=27_49&product_id=205
at October 24, 2010 No comments:

Taking in the last days of summer, on Saturday afternoon, I took Joe and Bella down to the beach. We knew it would high tide, a favorite game is guessing what the tide would be, it’s a habit of mine to ask before making the sharp turn towards Cedar Beach. The water lapped onto the side of the road. No one checked our beach tag, the post was deserted. It appeared as if one parking lot was closed for a fair. I parked the mini-van and we made our way down to the water. The waves were high since the winds were strong, and from the West faint cool cries of autumn were droning in. There were few bathers, the life guard chairs were removed as well as the rope that borders where the public bathers can dip into the water. There were no bi-planes, but one guy was flying a big fish synthetic kite. We ate peanut butter and jelly sandwiches and drank juice. The food hit the empty spots in our bellies and we paraded back into the clear water and conducted acrobatics for the curious on lookers. Later that night, we heard the thunderous distant explosions from a fire-works show from the fair. We ran over to the train station and raced up the bridge to look over trees and into the distance, and watched the tiny colorful shots expand for a second or two before the show was over. How many more days of summer will there be?
at October 18, 2010 No comments:

When your child is in the hospital

When one of your children is sick the world fades away. When one of your children is in a hospital, life trembles and revolves around visits to the confined sterile room, medical updates, and our uneducated speculations. The house was emptier without my wife and Emma Tess. The child was suffering with some sort of virus, couldn’t keep anything in and even drinking a teaspoon of water brought intense pain, which lasted almost three weeks. It’s been less than a week since had her gall bladder removed. She's only fourteen. Wednesday will be a week since I picked them up at Stony Brook University Hospital. Finally the doctors came to an agreement. Tests were indicating the gall bladder was failing, and thank God her symptoms were not caused by something more serious. Watching her pale face, the sad eyes and listening to the demure voice was upsetting; her voice was hoarse when she came out of surgery. Drug induced stupor; she looked too distant from the world. My Emma Tess is back home. Thank God.
at October 18, 2010 1 comment: