the Evolution of a Cro-Magnon by John Joseph

Last night, I finally finished John Joseph’s autobiography, The Evolution of a Cro-Magnum (2007 Punkhouse Publishing).   I say finally since I had a difficult time reading and finishing this 423 page book.  I felt it was full of exacerbation and to be blunt - I felt it was not authentic.  I am not suggesting Mr. McGowan (his birth name) did not have a rough childhood.  He and his brothers were raised in foster homes, abused by the foster families and suffered, emotionally and physically.  His depiction of one foster family, the Valenti’s, Italian immigrants was at times humorous and other times disturbing.  Mrs. Valenti would make the boys sandwiches, but not the sort you’d expect, perhaps a peanut butter and jelly, no and here’s an exaggeration she scooped the icing off Oreo cookies with her teeth and spat the contents on the slices of bread, really?   It seems the book was full of peaks and valleys one moment he is living with another foster family in Garden City with the same last name, McGowan.  The foster mother takes him clothes shopping, but John doesn’t want to wear the standard preppie clothes he sees everyone else wearing in the Garden City neighborhood, this is an opportunity for him and he brings her to a “black” neighborhood.  He is influenced by the clothes on Soul Train and buys platform shoes and silver pants and other shirts.  “These are my people.”  And he makes the impression when he walks through the halls in his new school.
Drugs are a dominant theme in the book.  A girlfriend who he loves overdoes on heroin – he finds her body and leaves her in a deserted house.  Really?  What kind of love is that?  He sells drugs and is very proficient at it; he learns how to skim off the drugs and even sells fake hits of acid to concert kids at Madison Square Garden.  He joins the Navy and then goes AWOL for fifteen years.  He gets involved with Bad Brains and it is their singer H.R. who opens his mind to spirituality.  But for each relationship there is the eventual demise.  He becomes deeply involved in the Hare Krishna movement and is one of their best “pushers” bringing in thousands of dollars as he lives on nothing.  But that relationship “cult” dissolves when he learns the leaders are hoarding the cash, living lives of luxury or has homosexual tendencies.

The book is written by a man who never really matures.  He manipulates anyone who comes across his path.   He is a misanthrope, homophobic, misogynist, and a xenophobe.  I found the book irritating.  You know when you listen to someone and you can’t get away from them? We’ve all been in situations like this, you at a party or on on board a flight and endure the pain of listening to their tales.  You’d like to question them, but that would create more stories. Throughout this book we see him trying to fit in with everyone.  He is always in the middle of some conflict and then magically bringing the opposing sides together to an understanding… that is ridiculous.  Drug pushers, gang members, cops, he is able to be the mediator.  Example, US Marines giving Hare Krishna’s a hard time in Hawaii, John Joseph is able to beat up three of the Marines in a parking lot and they in turn leave the Krishna’s alone… out of fear and respect for John.  Really?
Throughout the book John only wants to be accepted.  There is a real emptiness that is filled with excessive drugs, alcohol, and people who can see and take advantage the real John (Joseph, Blood clot) McGowan who is “street smart” but clearly ignorant.

Currently, John is giving tours on the lower east side.  I took the tour last fall and recommend it for those interested in punk history.  He is a bit arrogant, since he is a rock star and he asked me three times if I read this book since I read his other book; Meat is for Pussies, which by the way is a very good read.  It also changed my diet.  He still sings and tours with the Cro Mags.

Unfortunately for me, the Cro Mags history and demise is another part where perhaps John exaggerated.  He briefly touches on taking “some coke” during one of their last tours.  Not really accepting any responsibility.  But he decided to quit.  There is a contradiction here, since the band reported John was kicked out of the band and abused drugs and could not sing.   John explains the reason he quit was because their bassist Harley and an original member who always smoked pot and stole money from the band.  So, John leaves the band and becomes addicted to crack. Harley reaches out to him and gets John to rejoin the Cro- Mags and Harley once again steals money from the band.  Here is a classic John Joseph conflict why he rejoined the band, “I figured what the hell I could make some pretty decent money and I figured it would be a paid vacation.”  The next sentence, “For me music was never about the money.”


For some reason this book is very difficult to buy.  Try searching for a copy on Amazon or on EBay and you will be paying more than $50.00.  While on his 3 hour tour ($30.00) I asked John why it was so difficult to buy, and he said his manager bought all remaining copies since they are making a movie on the book.  After reading this book, I’d say there are a few pending law suits.  John Joseph wrote some very slanderous tales.  I’d like to see this movie, but I feel there is a defamation law suit pending. 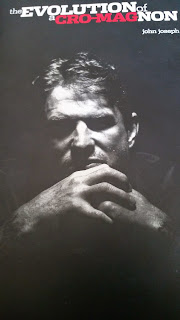