Charles Bukowski edits one of my poems 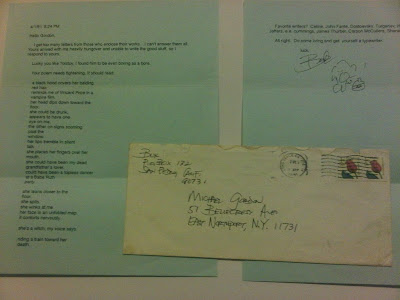 So what was it like to have Charles Bukowski edit one of my poems? How did it happen? These are the questions when my secret gets out. It’s not something I usually share, but I thought it would be a good blog entry.
I didn’t know who Charles Bukowski was until a fellow student in my writing class at Purchase College said my work reminded him of Buk’s. I forget the student’s name, but he looked like a dark creature with faded scars on his face, sad warped eyes and banged up, stained yellow teeth. He wanted me to write for his local paper, but I had heard somewhere that journalism ruined many fiction writers. Not interested I declared! What an ignorant twit I was…and still am in some ways. Anyway, I wasn’t sure how to take the comparison to Bukowski. Another student said my work reminded her of a David Lynch film. What? But I read up on Buk and learned he was a poet as well. I found a used copy of Tales of Ordinary Madness, which is a collection of his shorts. The original title, something about erections… would cause all of his works to be banned from my parent’s house. I was not impressed and to be honest, I was a little insulted to be compared to him. Buk was a stark difference to what I then considered literature: John Steinbeck, Hemingway, Faulkner & Ian Flemming. Not sure why I added Ian, but it gives you an idea of where my mind was. Oh, to be ignorant. I searched for his poetry at the book stores and couldn’t find any, so I figured he wasn’t a good poet till I came across one of his poems in an English lit text book. I liked the poem, and if I remember it was about his fondness for the color yellow. Years ago there was a thick book in the Port Jefferson library which included the addresses of American authors. It gave a brief summary and a bio. Bukowski was born in Germany and I imagined his struggles with the English language and assumed he had an accent. I wrote a letter to Buk asking who influenced his work and if he would read my poems. I included three poems I had scribbled that weekend in pencil and sent them off.
He wrote back. I can still see the hand written envelope and then opening up the letter on blue pages. He said he received many letters just like mine. “I’m too hung over to write the good stuff so I respond to yours.” And he mentioned something I wrote in my letter, “luckily you like Tolstoy, I found him to be a bore.” He did edit one of the poems. “Your poem needs tightening it should read…” I will find the letter and make a copy and attach it to this entry in the near future. His influences, Li Po, Fante (I had heard of neither) Dostoevsky…and some others.
After the first letter there were a couple of others. I read more of his works and found books of his poetry and read some of his short story collections. I sent him copies of the comic books he did with R Crumb which he signed and mailed back. Another time, I found a picture in a lit magazine of him sitting in his office at his desk; radio against the wall, an electric typewriter with stiff keys waiting to be struck and I imagined his German accent whispering to the photographer, hurry up and take the fuchin ‘ shot. After he passed, Black Sparrow published some books of his letters. I had the opportunity to speak to John Martin, the publisher. When I mentioned the letter, he said it was rare, for the fact that Buk had edited the poem and I should hold onto it, but he could not use the letter.
I need to find the letter.
Tell you what, if you’re interested in reading one of my shorts and a poem, I will send them to you. Send me an email and let me know after you read the work if I still write like Buk.
trainwriter@gmail.com
If you’re truly courageous, than please buy a copy of my novel, Killer Commute on Champagne Books
www.Champagnebooks.com
at September 09, 2010 No comments: