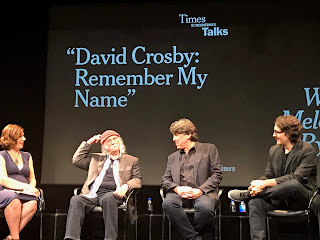 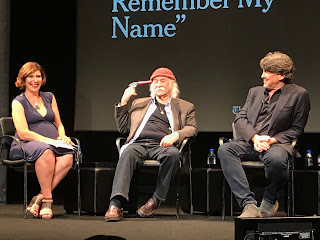 I left work early on Monday and drove into Manhattan to see a documentary on David Crosby, Remember my name.  It was hosted by NY Times, Cameron Crowe, who conducted the interviews with Mr. Crosby, as well as the director, AJ Eaton and Melena Ryzik, a music/cultural journalist from the Times sat around David Crosby.  I have to say the movie was very good and yet, it was a shame the others from CSNY were either not present or were not interviewed for the movie, but as Crowe mentioned, he thought it was better to keep the movie on the main subject, David Crosby.  This was my first journey into the city from Bethlehem.  I was not sure what to expect and lo and behold it took a little less than two hours.  Left at three and pulled into the parking garage (East 61st) at 4:55. It was hot in the city and I wanted to find a cheap place to eat.  I’m on a tight budget and the night was already expensive, I don’t want to say what I paid for the ticket, but this was a gift to myself.  I found a cheap place, ate and walked to the theater and waited in line.  The event was sold out.  There are only three hundred seats in the place and once inside, I sat in the third row, between two men who each used the arm rest, the one to my left took his right arm and plopped it down and the one to the right took his left and plopped it down; so I sat there during the movie thinking what do I do with my hands?  I can rub my mouth, scratch myself, and put them in a sort of pray full pose.  I know what you’re thinking, who gives a shit about your hands tell me about the movie.  It was very good, insightful and I felt the movie caught David Crosby in his highs and lows.  Now he is 77 and having to get out on the road to pay the bills as he said.  Eight heart stents and diabetic.  Scenes of him testing his sugar level and injecting himself with insulin back stage. There were stories about The Byrds, touring, clubs, childhood, Jim Morrison, Joanie Mitchell, Mama Cass, CSN concerts, women, drugs and sex and his dick.  Maybe not in that order.  Here’s a secret, on August 11th Cros is playing a free concert as part of Lincoln Center free series in NYC.  I intend to go.  I want to see him perform.  It may seem ironic, but as I was driving back to this place, I realized on July 22, 2017 I was kicked out of the house and still went to see Graham Nash who played at The Landmark in Port Washington and now almost to the day, two years later, I’m leaving Crosby back in the city, in the lights fading in the rear view mirror and pray for his continued path in this life. 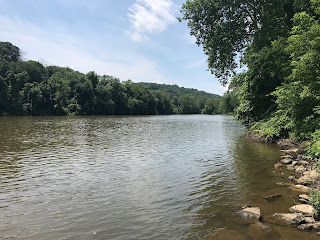 Sitting in the back yard at my parent’s house.  Last year, on the fourth, I was living in Northport, down near Crab Meadow and paying too much for a small room in a cottage, but I was close to my family.  My parents were only five minutes away and three of my children, out East on Long Island in Port Jeff Station.  They were in the house that Ali and I rented.  The year before we celebrated the fourth in the Adirondacks.  It was our last vacation we took as a family, and I wrote about it in the blog. On this day in 2015, we flew back from California where we spent a week on vacation.  The year before on this day, my son had the courage to tell me he was bi, Joe was eleven at the time.  Life moves on and like a dream or a circle - we evolve.  Another analogy will be a river that carries remnants of soil and stones in its rolling water, pushing forward and dropping off what it carries in different parts on its journey.

I’m living in Bethlehem, PA and I am engaged to a wonderful woman.  Ali is doing well on her own, having purchased a house and settling in.  This all took place within the past year.  On July 22, Ali and I will be separated from one another for two years.  A lot has changed in our lives, but instead of a general statement, I am grateful for the transition.  I battle with loneliness, of not waking up and seeing the kids in the morning or being a part of their daily lives.  I battle with the distance and yet while I was on Long Island, we would only see each other on the weekends.  They have their lives.  Yet, I am discovering more about myself and discovering love, strength and compassion.

Joe graduated high school this year.  I was at the graduation ceremony and the week before, took pictures of Joe, wearing a beautiful dress and high heels, as he set off on his prom with his date.  For his graduation, I drove four hours in rush hour traffic from New Jersey, where I had a meeting that afternoon, but I made it.  No air conditioning.  Feeling light headed and frazzled, I stood behind the stands and looked down at the field and watched as my son sang with the high school choir - for the last time and watched as he walked across the stage, in high heels, to receive his diploma.  Afterwards, I walked down to the field and Joey gave me a big hug, you made it, he said.  Joe had a legion of friends come up to him and hug him, he was and is very loved and respected in most of the community.  Amanda was there from Boston and we hugged.  She looked amazing and wanted to get a family picture together.  Emma Tess, my quiet warrior, hugged and yet for my youngest, the pain is still fresh, Bella kept her distance from me.  It is alright.  She needs time and I will respect her space.  No family picture.

I drove back to Bethlehem after the ceremony and once again the loneliness and sadness kicked in. My family were headed back to their new house and continued their lives as normal without me. Traffic was lighter.  It was night.  I spoke to Meli on the ride back and she said, what a wonderful father I am. I try to be.
I try to live in the moment with gratitude and live a life of integrity.  Like the river, I carry certain stones and stories and will discard of them, left to be in their places in the past.  I will move on through this life, discovering for the first time another realization.