Running shakes off the Blues

I try to run every other day. Mornings are best, but when I feel days have passed and a little sluggish, I’d get home after work and go out for a 3 mile run. Avoiding the blues, lethargic, even sick, I push myself and get out. Running is not difficult for me, there’s not a lot pain. This summer there were extreme humid days and I should have skipped those days, breathing was difficult, my muscles ached since they were not receiving the rich oxygen; I stopped running and would walk losing time and feeling the pressure of getting on the road to work. Of course the spring and summer are best. Getting out with a long sleeve t-shirt that soaks up the sweat is best. My sneakers are light and I try to run in shorts as often as possible. My faded orange baseball cap had sucked and dried up layers of white sweat stains. Sometimes I assume strangers look at me and guess if I played ball. Thoughts swirl back and forth, and there have been some satoris or awakenings during some runs. My writing has been effected in a positive way, the ideas of a scene – how it would develop - the narration, a character emerges or a scene shifts and when I get home I try to remember it all. When I travel I like to run in different cities, there’s an intimacy with the streets and the landmarks that only a runner can have. At home, there are a few occasions when I go out for long runs, to the end of the Port Jefferson harbor where the boats and ferries pass through a narrow opening…big rocks…the desolation of shells and abandoned wrecks. Those runs are rare, but when I get one in, I feel a closer connection to God and send off prayers in the salty breezes.
at August 28, 2010 No comments:

Fargo North Dakota is a city that will never shake off the notorious reputation it received from the movie bearing its name. Ever been there? Last Wednesday I drove more than two hundred and fifty miles from Minneapolis to Fargo for some meetings and spent the night in the Courtyard in Moorhead Minnesota. That’s right, part of my territory is North and South Dakota. The last two trips I stopped in Alexandria, MN, but skipped it since I was running a little late heading to and from Fargo. This late in the summer the acres and miles of crops were pulled leaving open land as far as the eye could see. Faint rainstorms faded away as I drove in drizzle. Bugs splattered on the windshield, as I drove the rented Cadillac Escalade on Highway 94. Thank you for the satellite radio. The last time I was in Fargo was two years ago? I feel as if I wasn’t there last year, but it’s my third trip and hopefully not my last, since I never really investigated the town. It’s flat. There are strip malls. There is minor league team there, and they are in first place in the independent league. Some cars are old and beat up as if they saw too many horrendous winters, with salt and sand that chewed away at the metal, bearing rusted wounds, and spilling out smoke from loose tailpipes. I get into Fargo for some meetings and get out spending the night in Minneapolis before flying back to Long Island. I plan my trips so I can catch a Twins game. I was able to walk to their new stadium from the Renaissance Hotel. It’s a good clip, and I wished I changed into a T-shirt and brought shorts. It was humid. The next morning I went for my jog over some of the local bridges and across the river…it’s a beautiful run and I’m glad I got it in. I was going to spoil myself and sleep in since I stayed in a suite. When I got back, I took a shower and changed and had a quick bite in the concierge level and caught my 9:30 flight.

Email ThisBlogThis!Share to TwitterShare to FacebookShare to Pinterest
Labels: The Twins

Finn’s Revolution WUSB 8/17/10
Driving home after making my cold calls on the west coast, I discovered a cool show on WUSB a few months back. The DJ was playing song after song of diverse music, eclectic, jazz, songs from disenchanted angels and such. Coltrane, Lou Reed, replacements, Minor Threat. I sent an email to the program director, asking for an interview to promote my novel Killer Commute. I called after there was no response. Last Tuesday the hard work paid off and I sat down in the radio booth with the man himself, Finn and chimed in after he played REM’s Mr. Richards. I hope to link the interview here so you can hear it. Finn asked some great questions and I truly appreciate the time. He ended the show with one of my requests, Broadway by The Clash. Joe Strummer sang a couple of lines into my ear when both of us were intoxicated after one of his last nights in New York, Ain’t my fault it’s six O’clock in the morning…”
Thank you Finn
at August 22, 2010 1 comment:

The Baseball Project at Maxwells 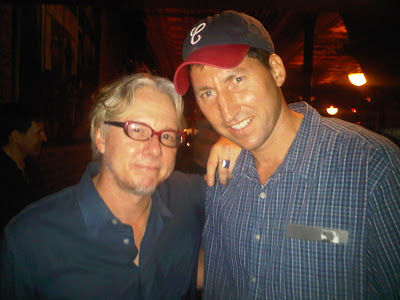 I know this is more than a week late, but this weekend I have every intention to write some ditties. These will include, the interview with Finn on WUSB, travelling to Fargo, North Dakota, and the joy and peace of running.
The Baseball Project came to Maxwell’s, Hoboken NJ last week. This time the lineup included Mike Mills from REM instead of Peter Buck on bass. It was the first time I saw a show there, but the spot has a history in alt, garage music. The stage is very small, as well as the venue. At most two hundred people could fit in there, but that night the BP had close to a hundred.
My goal that night was to give Mike Mills a Killer Commute Postcard and to discuss the fact I used lyrics from their song, MR Richards. As Erik and I walked in Mike Mills was ahead of us. I approached the man, and spoke into his right ear as the opening band was playing. He didn’t seem to believe me, and a little later when he was attempting to buy a glass of wine at the bar, I walked up and paid the tab and he said, “I noticed your name is not on the card.” It’s in very small type in the cover, and I introduced myself. He read the blurb on the back and said he’d buy a copy. Mike as well as the rest of the band is real down to earth and very gracious. After they played we took this picture together.
What about the show? They were a little off on the first song which was released that week, Triple Crown…but once they played Long Before my Time, and Ted Fucking Williams, they were on. In fact they played the whole album and kept on coming out for encores. With Mills, the harmonies between him and Scott were close to perfect, since they’ve worked so well together for all of these years.

After the show I spoke to Linda for a couple of minutes, and she said Mike filled in, and is a bigger baseball fan than Buck. Buck is playing with Tired Pony and they’re due to play in New York in October, first US show and Ali and I are there. Linda said she was going and would see us there.
REM news as per Scott, no tour to support the new album! It sounds like a cross between Accelerate and Reveal.
at August 20, 2010 No comments:

So how did I get the idea for Killer Commute? Please read the link and enter the contest...