Driving on the highways Business Travel 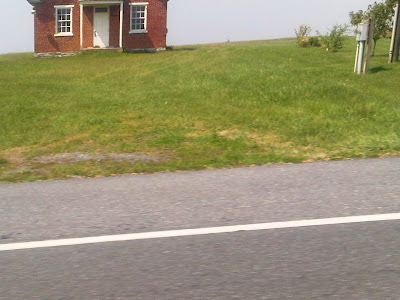 Why are so many roads under construction in Pennsylvania? There has to be a reason, the Governor has an in with the Department of Transportation, or his brother is the State’s Highway Superintendant, but there has to be a reason, since it seems after each five mile stretch there’s construction. It slows you down. Try making an appointment on-time. Allow yourself ample time. Yesterday I woke up in Lancaster PA, and had a meeting in Marietta and then up in Hershey at the University there. Both were good meetings, I was well received and there are some opportunities. What I liked most was the slow traffic towards Route 76 and snapping some shots of the farms. It was a brutal hot day yesterday. I regret that Ali and the kids weren’t with me. The ride would have been more enjoyable. I need to head out. I have an appointment in an hour in Horsham, who knows what the traffic will be like although I’m only a few miles away.
at July 29, 2010 No comments:

July 23rd
I wanted to run this morning, but I made a promise to my body to take a few days off. Last Saturday was the first day I played basketball in years. We used to meet at Avril Park, New Hyde Park and play for hours. It was a good opportunity to share stories and shit when we saw each at the office. I recall John Wagner, Pete Marcino and his brother Jim and Pat Sweeney and of course John Monetti and Arnold Bernard. Monetti and Bernard are still playing. I picked up Eric in Northport at 7ish and we were back in New Hyde Park just before 8. Playing basketball with guys you have not played with can be frustrating. Basketball is a team sport compared to running. With basketball you need to have an idea of the little finesses, like setting picks. This is when you intentionally stand and block an opposing player from defending your teammate; after the block is made you move towards the basket and may get a pass from your teammate or in the least, get close for the rebound. That’s setting a pick. The other basic play is the give and go. I pass the ball to you and I go to the basketball and you pass the ball back to me. I shoot the ball and it goes in. Give and go. My team was not playing as a team. When individuals play, they make mistakes, miss passes, don’t set picks and eventually drain themselves of energy. These days it’s close to ninety at nine thirty in the morning and humid, a speck of sweat is burned off in the sun, and after each game you find yourself sucking down the Gatorade and water and thinking…why am I doing this? This is fun? I don’t like talking shit when I play, I’m more of an old school player, keeping my mouth shut and looking for the open man who’s going to get “the rock” in. The rock. I think that’s an old expression today, but when you’re forty four anything other than the ball makes me sound so cool, doesn’t it? Sure. We played our games and won some games but lost most, and tomorrow we’re back on the court for more games. How did I play? It’s not about me, it’s about the team. I played awful. I’m interested in tomorrow’s outcome. If it’s like last week, there would be the shower when I get home, and a quick lunch, and the eventual escape to a nap in the air conditioning. The body can only take so much punishment.
at July 23, 2010 No comments: 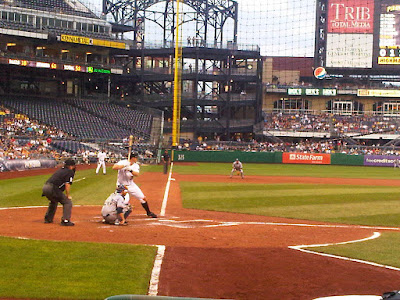 Pittsburgh 7/21/10
I’m at the airport waiting for my flight. I arrived yesterday and should have known something was up. My driver’s license expired. It expired last October, and once before, maybe when I left Baltimore last month the TSA agent pointed it out in Baltimore and yesterday morning at Islip, but said it’s still valid under their policies. Fine. I filed it way. I didn’t renew it. Why? You can’t rent a car without a valid license. I tried to get a car with Hertz, but it wasn’t happening. The woman behind the counter said, you can try to reach DMV and they can fax us something. I looked at her and shook my head. Dealing with New York’s DMV is like pulling teeth, waiting to wait and more frustrating than needs to be. I called Ali, after a feeble attempt at renting from Dollar (Hertz said in a whisper, Dollar may rent a car to you) It wasn’t happening. Thank God for out agent here, who arranged to get me picked up and made my appointments. In fact, I made it to the Pirates game last night. When I walked to the stadium I asked for one ticket, the attendant asked, where do you want to sit? Where’s your best seat? There was a pause, and he said how would you like to be next to the dugout? Thirty five dollars. Last night I sat in the best seats I ever sat before. I don’t think I’d sit that close again! There was only one row in front of me. The players for the Brewers were mere feet in front of us, and I know they heard these little shit bag kids who taunted them. The Pirates won. I had a chance to tell Willie Randolph, thanks for your years in New York. He nodded his head and sort of tipped his finger on his cap. Walked back to the hotel and spoke to Dennis for awhile before drifting off to sleep. I’m back at the airport and sitting here in an empty terminal as jets zip off the runways before silence returns in this empty place.
at July 21, 2010 1 comment:

The cruise overall was very successful for all of us. The fact we ate dinner together for almost a whole week was an accomplishment. We had time together as a family, and I was able to read and take a nap each day, a very restful vacation, a needed break from the world.
Now it’s back and finding some venues to promote Killer Commute
at July 21, 2010 No comments: